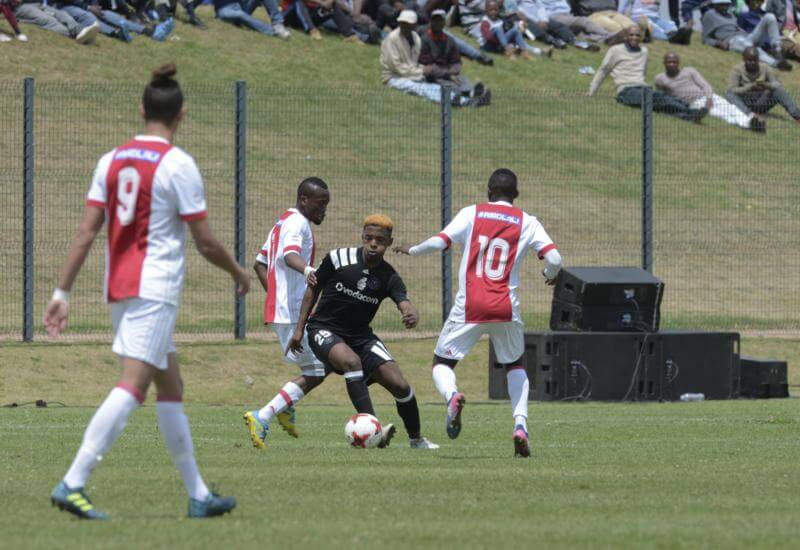 The Orlando Pirates Multichoice Diski Challenge team bounced back from their shock 2-1 defeat to Baroka FC last week, to beat Ajax Cape Town 2-0 in a match played at the Tsakane Stadium on Saturday.

Goals from defender Justice Chabalala and Grant Peters were enough to see the Buccaneers collect maximum points on the day to move within two points of log leaders Maritzburg United.

The Buccaneers went into the lead in the 24th minute with Chabalala heading home a well taken corner kick from Ricardo Lourenco.

The Urban Warriors had an opportunity to equalise in the 84th minute when they were awarded a penalty after Yusuf Maart was adjudged to have fouled Sedwyn George. George, dusted himself off to take the spot kick but his shot struck the bar – much to the relief of Maart.

Super Sub Thobela Sikhakhane put the result to bed when his cross led to Peters’ goal in the 91st minute.

Next up for the Buccaneers is an away match to Platinum Stars.

SAB Made to Sweat It Out

Meanwhile, the Orlando Pirates SAB team came from behind to defeat Pimville Young Stars 2-1 in a match played in Randburg on Sunday afternoon.

Goals by Samuel Nkomo and Katlego “Kuruman” Cwinyane helped Pirates maintain their 100% start to the season after six rounds played.

Despite, falling behind early on in the game and also a sending off of striker Thobela Sikhakhane, Pirates were able to claw back and register a hard fought victory.

Next match for the Pirates SAB team is sister club Randburg. The match will be played on the 14th at the Randburg football grounds.