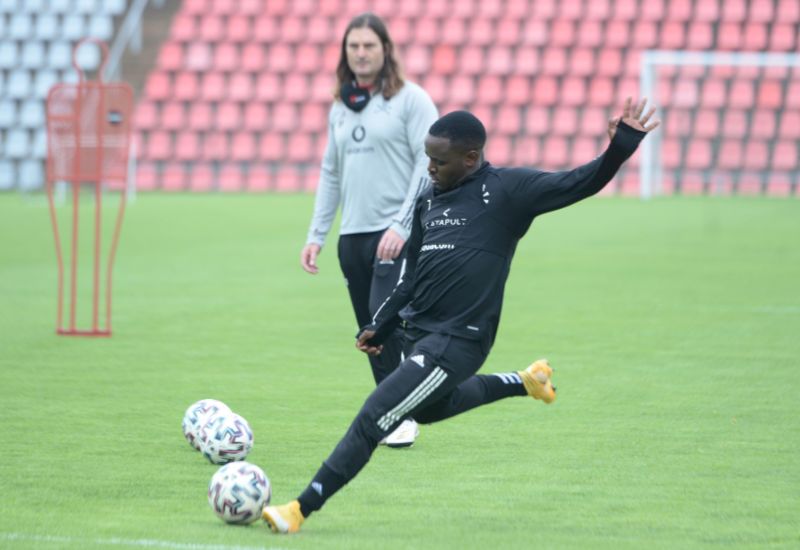 Striker Gabadinho Mhango is one of a handful of players in line to represent Orlando Pirates at the next Africa Cup of Nations (AFCON) tournament in Cameroon next year. This follows what was an against-all-odds qualification journey by Malawi, who entered the last two fixtures well behind the eight-ball in terms of Group B standings.

“The Flames” Class of 2021 emulated a feat only previously achieved by two Malawian men’s national teams before them - the groups of 1984 and 2010 - when they won their last two qualifiers to book their ticket to the event last month.

For the diminutive attacker, the opportunity to feature in his first major tournament with his national team is one that evokes great excitement, having been part of national setup since making his debut in an unsuccessful qualification bid in 2012.

Now 28, with over 150 senior professional matches under his belt, Mhango sat down for an exclusive interview with Orlandopiratesfc.com, reflecting on Malawi's remarkable tale.

How does it feel to have qualified for AFCON, seeing that Malawi were not in a good position before their last two fixtures?

GM: It's something special for the country. You know Malawi is not a big country, and qualifying for AFCON is something I think will be remembered for a long time. It's a great feeling for the Malawian national team, as well as everybody in Malawi.

What do you think Malawi did right in the last two games?

GM: We believed in each other. I think some people outside the setup probably did not believe we could pull it off. I mean, we may look small on the field. When you see us, you'd say we are small boys playing against grown men. But at the end of the day, we have that heart.

On a personal level, it will be your first major tournament with the senior national team after being part of the setup for close to 10 years. What does finally qualifying mean to you?

GM: It feels good to have been part of the team that made the country proud. It's something I've always wanted to be able to achieve. Before even taking to the field for our first game in the international break, we saw it as an opportunity to make history for ourselves, and yeah, we managed to do that.

You have had to overcome a couple of injuries this season, has that affected what you hoped to achieve before the start of the season for both Club and country?

GM: Absolutely! But you know, as a player, you need to accept that injuries are a part of the game. You might tell yourself 'I want to do this and that' during the course of the season, but injuries can disrupt those plans. Yeah, I have to say it was hard. Especially coming back after an injury can sometimes feel like starting from scratch. It can affect your performance. But credit must go to the Orlando Pirates medical team for their hard work behind the scenes.

After meeting Ahli Benghazi in Libya, are you expecting them to come out with a different approach when you play them at Orlando Stadium?

GM: When we played them in Libya, I feel we were the better team. It's just unfortunate that we did not have the best luck on the day. They are a tough opponent, but with us playing at home, it's now a must-win game. We want to win this game, because doing so will put us in a good position in the group. The feeling in the camp is that we must leave everything on the field on Sunday.