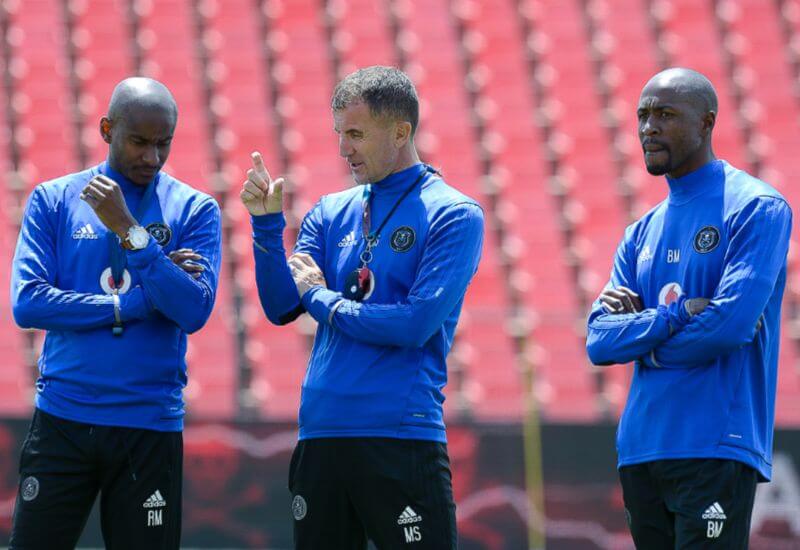 There’s a phrase that speaks to the danger provided by a wounded animal that is backed into a corner. With everything against it, and with nothing to lose, the result of facing such a proposition could be trickier than expected. This is the position that Platinum Stars find themselves in, wounded and in a corner, ahead of the visit of Orlando Pirates this weekend.

Head Coach Micho Sredojevic, knows this all too well, and he heeded caution when speaking to Orlandopiratesfc.com ahead of his team’s trip to Rustenburg today.

OPFC.com: Coach another tough match against Platinum Stars coming up. Are you and the boys ready for the game?

MS: Look, it’s clear to see from the looks of the current league that there are no easy games. Platinum Stars is a tough team, our focus turned to them as soon as we were finished with the Polokwane City match and we having been working hard in planning and keeping our players focused on getting three points on Saturday.

OPFC.com: How difficult is it to prepare for a team that is languishing at the bottom of the log?

MS: Like I said earlier there are no easy games in the league this season. Every team is in touching distance of the team above them so there is no time to relax because one game you are in the top eight and next thing you are out. Platinum Stars are wounded lions, a team of that quality does not deserve to be on the bottom of the table. Often matches that one is expected to win are always the hardest.

It is a known fact that teams play their best football when playing against the likes of Orlando Pirates and therefore their current form will not be a factor. We are rather making preparations like we would for any other game. We expect a tough encounter from a tough opponent and that is our approach to this match.

OPFC.com: Platinum Stars has become somewhat of a hoodoo team for Pirates. We have not beaten them in three years, surely there is a feeling to change that.

MS: This season has seen us do away with ‘so-called’ hoodoo teams. I don’t believe there is such a thing as hoodoo team, it is just a mental block that has no basis in reality because we are a quality side. Therefore, the approach will be similar to the approach we had for Celtic and Sundowns.

We are fully focused and determined to play a positive brand of football, with high levels of concentration throughout the match because this is an important game for us. For them it will be a battle to move away from the relegation zone, and for Pirates it will be a fight to stay within touching distance of the leading pack. This is an important match for us, too much is at stake and for that reason we will leave it all on the field.

OPFC.com: The recent draw with Polokwane City hints at an element of complacency after a winning start to 2018. How is the Technical Team hoping to deal with that mental aspect?

MS: Platinum Stars is the perfect match to give answers to whether we were complacent or, the reality that we faced a defensively well-organised Polokwane City. But as the Technical Team we are doing everything possible in managing partnerships, departments and our players as individuals in order to chase away any whiff of complacency in the team.