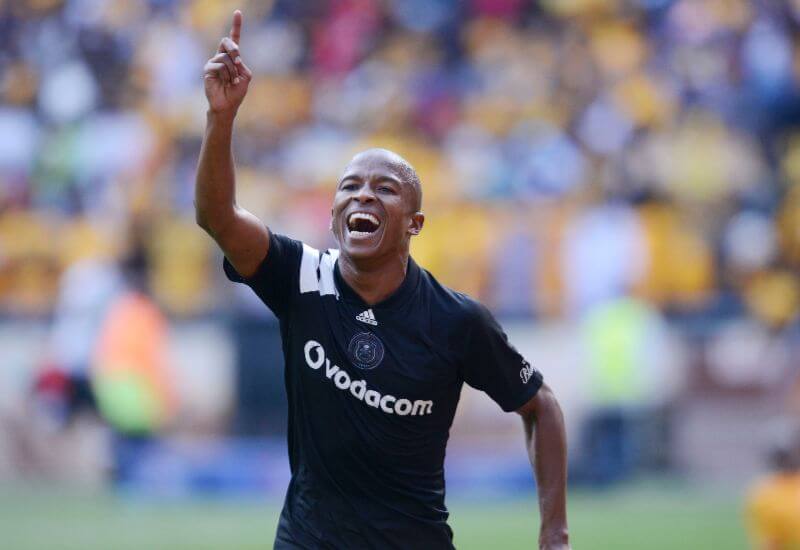 With this result, the Mighty Buccaneers not only secure the vital three points on offer but also the bragging rights for the season thanks to a goal by Thembinkosi Lorch as well as a brace from Luvuyo Memela.

The win sees the Buccaneers narrow the gap at the top to four points with seven matches left to play.

It was the visitors who applied the early pressure but for all their efforts, could not break down the resolute Pirates defence which did well to contain Steve Khompela’s men.

Lorch picked up a poor clearance from Willard Katsande in the 21st minute and turned the Chiefs defence before sending a perfectly-placed shot into the bottom corner of the net.

The lead was short-lived however with Chiefs hitting back to level the game eight minutes later. Tshabalala sent in a dangerous ball from a free kick and Leonardo Castro got in between Gladwin Shitolo and Happy Jele to score with a well-directed header.

The half time whistle blew with the teams tied at 1-1.

The Pirates brains trust decided to make a substitution at half time, replacing Bernard Morrison with Memela. The move paid immediate dividends, as substitute Memela controlled a fine pass from Musa Nyatama with his very first touch of the ball, and scored a left-footed shot with his second to put the Buccaneers back in front.

Like they did for the opening goal, Chiefs tried to respond immediately and almost did in the 54th minute when Castro was on the end of yet another set piece from Tshabalala but this time Mpontshane was on hand to thwart the danger much to the relief of the black and white section of the crowd.

The Buccaneers would respond with an attempt of their own two minutes later through the skilful Shonga. The 21-year old was on the end of an Innocent Maela cross and took a shot which forced a save out of Khune. Katsande almost scoring an own goal with his attempt to clear the loose ball.

On the hour mark Memela hit the woodwork with a deflected free kick, before the final nail in the Amakhosi coffin came in the 74th minute. Shonga was sent free down the left by Ntsikelelo Nyauza before the Zambian international sent a pin point cross for the onrushing ‘Meme’ who curled the shot around the onrushing Khune.

The Amakhosi looked for a way back into the game and on 83 minutes they nearly halved the deficit, with substitute Bernard Parker stabbing a shot on target, but to be denied by a sharp save from Mpontshane to ensure Pirates took home all three points.