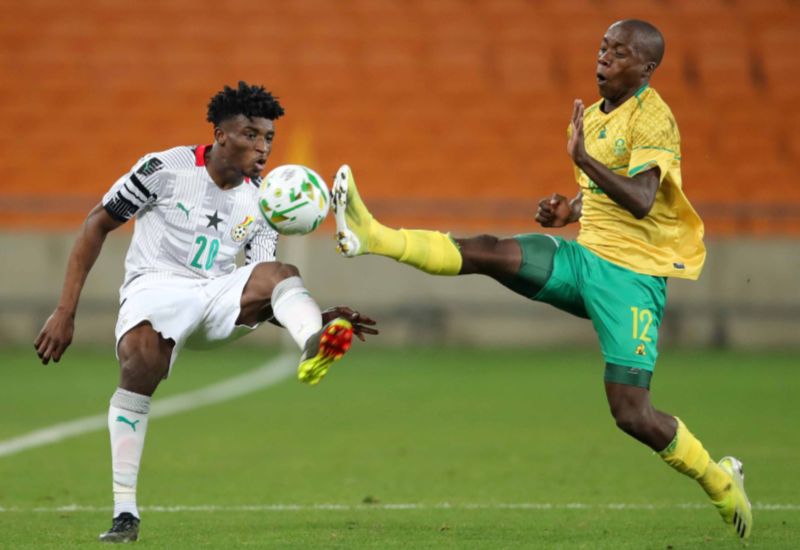 The recent international break produced mixed results for the Orlando Pirates players involved in the Africa Cup of Nations (AFCON) 2022 qualifiers which took place in the past week.

A total of nine Buccaneers players received national call-ups ahead of the past week's fixtures, with all but one getting to feature on the field.

Orlandopiratesfc.com looks into how the players, and their respective countries, fared during the international break.

The bulk of Bucs' representatives in the qualifiers wore Bafana colours, with no less than five Pirates players called up to Molefi Ntseki's side.

Defenders Thulani Hlatshwayo and Innocent Maela made the starting line-up against both Ghana and Sudan, while midfielder Ben Motshwari also had some valuable minutes under his belt as an early substitute against the Black Stars before earning his first Bafana start in the last fixture.

Thabang Monare made his international debut, starting alongside Motshwari in Sudan in the same match where Vincent Pule was introduced as a second-half replacement.

Goalkeeper Richard Ofori sat out both of Ghana's fixtures, but had reason to celebrate as his side finished at the top of Group C.

The Black Stars secured qualification with a point against Bafana Bafana at FNB Stadium, before completing a successful campaign with a convincing home win against São Tomé.

Gabadinho Mhango's Malawi left it until late, as they came from an unlikely position to book their first appearance in the continental showpiece in over a decade.

The Flames were placed third in Group B heading into the last two rounds of the qualifiers, with Burkina Faso and Uganda perched above them.

It took a remarkable effort for Malawi, who produced maximum points in their last two matches and secured their ticket to Cameroon, as they ensured AFCON participation for only the third time in their history.

The Bucs striker, who scored one of his country’s two goals in the previous rounds, featured in the 1-0 victory away to South Sudan but was not part of proceedings when his side recorded an identical scoreline at home to Uganda in what was a do-or-die fixture on Monday.

Despite finishing strong in the qualifiers, Deon Hotto and Namibia will also not be taking part in AFCON 2022.

The Brave Warriors beat Chad 3-0 before claiming a 2-1 victory over Guinea.

Hotto only featured in the final qualifier, where he provided an assist. However, Namibia fell four points shy of a qualifying spot, finishing third in Group A.

Terrence Dzvukamanja is another Buccaneer whose team booked a ticket for next year's showpiece event, following Zimbabwe's successful qualification campaign.

The player started in the 1-0 home victory over Botswana, which secured qualification for the Warriors. He was an unused sub in the defeat to Zambia in the final Group H fixture.