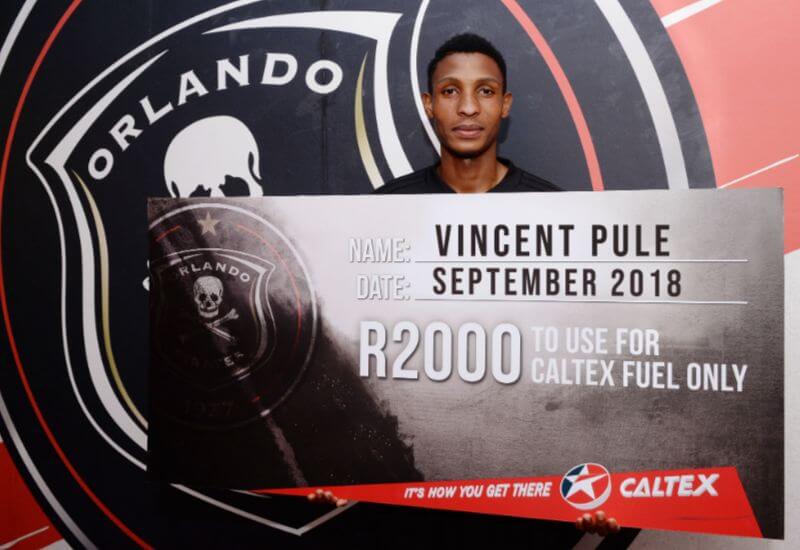 Vincent Pule has dominated the month as he claimed both the LG Player and Ford Goal of the Month awards for September 2018.

The 26-year old Pule, who picked up an injury against Golden Arrows earlier this month, enjoyed a stellar run in September, bagging two goals and had the same number of assists to remain second on the ABSA Premiership goal charts.

On the goals front, it was his strike against Baroka FC that saw him pick up the fan vote in the Ford Goal of the Month competition. Pule remained cool, calm and collected as he received a pass from teammate Thembinkosi Lorch, before controlling the ball and unleashing a tremendous strike with his left foot.

Pule has been a key player for the Buccaneers, displaying a constant level of consistency on the attacking front, and providing opportunities for his teammates to capitalize on. “Shuffle” has quickly endeared himself to his teammates and The Ghost, and through his consistent performances, he was voted as the LG Player of the Month.

“It’s a good feeling when you are playing well and scoring goals, especially when that helps the team to do well. To be recognised by the fans for that contribution makes me very proud because as players, we do it for them. We want to make the fans happy,” said Pule.

“I’m very happy to win the awards for September and I know they will motivate me to do even better I the months to come.”

Teammate Thembinkosi Lorch who also weighed in with two goals for the month fell a few votes shy of Pule in the online polls.

Official Fuel Partners, Caltex South Africa has awarded Pule for his goal against Baroka FC with R2000, while the Official Mobile and Electronics Partner of Orlando Pirates, LG South Africa has gifted him a shiny new LG G7 Smartphone and customized phone cover.