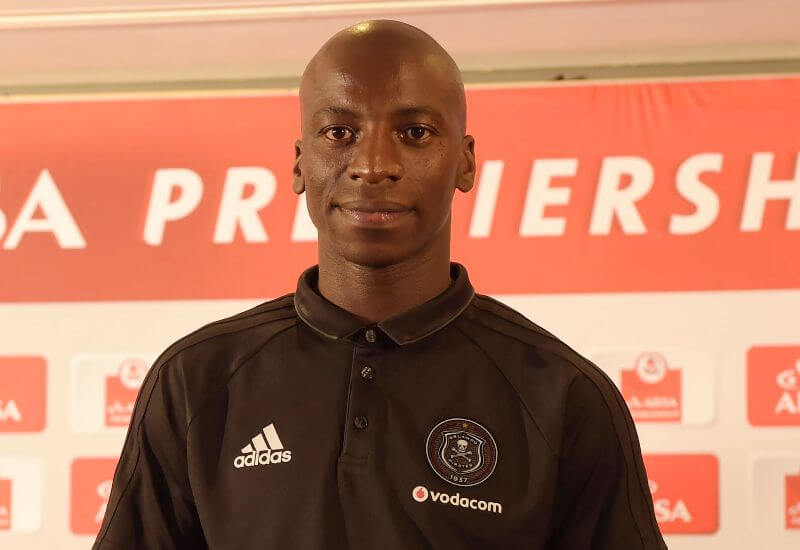 Musa Nyatama, like so many of his team mates is enjoying a run of good form so far this season. His nomination for the March Player of the Month is but another confirmation of this fact.

SIX Man of the Match awards in all competitions

vs. Maritzburg United (A)

Player of the Month:

Individual Stats in all competitions:

Winning Player of the Month?

“Winning this award means that I am gelling well at Orlando Pirates and adapting to the style of play that the coaches want from us. This award means a lot to me. It means that I am moving in the right direction with my football and that I can still show people that I am a good player who works hard, despite being 31 years old.”

“It also motivates me to keep doing well over the next five games, because now people will be expecting that I keep this form going into the end of the season. It’s a good thing because these awards keep you on your toes and make you work even harder because people are recognising what you are doing.”

“I want to thank my team for allowing me to play the way I do, it’s a collective effort and I’m here accepting this award off the back of the hard work that they put in to everything we do.”

“I think the turning point for me was the realisation and acceptance that I have a lot to learn. I am willing to learn at every training session and take that into every match. I always try to improve as a player by paying attention to what the coaches say. Coach Micho, Coach Rhulani and Coach Benson always motivate us, they bring us up when we are down and they also encourage us to stay humble and focused when the team is winning. They encourage us to keep sight of our goal. Before each game the coaches always show us motivational videos to help us focus. I use that opportunity to clear my mind of everything but the opposition, I also try to maintain that focus throughout the game.”

“It’s the first time in my PSL career that I have won so many Man of the Match Awards or to have this level of consistency. I know I have to work hard at each and every game and try to get wins for the team. However, I can only attribute my good form to the calibre of quality players surrounding me. My team mates make me look good on the field, I appreciate that. We help each other with our shortcomings, we cover one another wherever we can and always push each other to the max.”

“Firstly, it’s an honour to play for a big team like Pirates. I had to adjust quickly to the team’s style of play by focusing on all the details at training and also learning about the culture of the Club and most importantly what is expected from us as players”.

“Orlando Pirates has quality players, it’s not about who plays at a particular position because all the players are capable. We do a lot of passing drills where the coaches teach us not to have too many touches on the ball. We are restricted to one or two touches, which makes it easy for us to launch a counter attack or to keep playing a fast paced game. We like to dictate the pace of the match through the ball. We also try to play from the back and move the ball forward as a team, knowing which spaces to exploit when attacking.”

Can you pin-point one moment that turned the season around for you?

“Phew! That is a difficult one but I think the turning point for me was last year when we played Bloemfontein Celtic away and we came out with that one goal victory. I knew going into that match that it had been a long time since Pirates beat Celtic at away and I wanted to help my team break that losing streak. When I scored the winning goal, it was a cherry on top and I have not looked back ever since. If anything, I have grown in confidence and believe that I can contribute more for the team”.

Your role has changed since joining Pirates – operating from deep (as a #6) and more centrally (as a #8) and even further forward (as a #10). Which is the role you prefer?

“Playing as an 8 and 10 is where I was used in teams I previously played at, but when I arrived at Pirates the coaches felt I could offer more as a playmaker coming from deeper in midfield, the 6. I was worried when I first started but I must confess that I rather enjoy the way the Club wants me to play in that role. It has allowed me to grow in so many ways as a player.”

“With the position I was playing before, I was closer to the goal posts and I had to score a lot. When you are scoring in those positions, where it’s expected, then you are happy. The moment you start struggling, it puts you off your game because you become consumed by getting back on the scoresheet. But with the new deeper role, I have to help the defence and also establish the play by being one of the first outlets of attack from the back. I have grown in this position because I am involved in a lot more phases of play and this has given me back my confidence. Like every player, I want to score goals where I can, but my primary role now is to play for the team and follow instruction. If I can execute my mandate on the field of play and help the team win, then that is objective achieved for me. Following the plan will allow me to be in a place where I can protect the team, and also be in good spaces to score goals as well.”