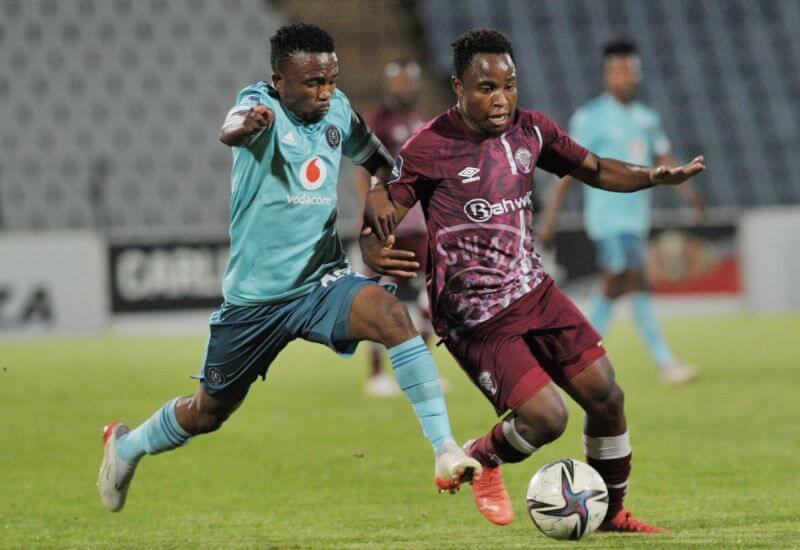 On a busy day of DSTV Premiership action, the Original Derby concluded the day’s fixtures with the Buccaneers seeking a second win on the trot in a bid to reclaim second spot in the standings.

There was a single change made to the Buccaneers starting XI, with Thembinkosi Lorch making his first start of the season in place of Collins Makgaka.

The two rivals were deadlocked at 0-0 for only two minutes, with Bandile Shandu striking for the visitors in the third minute after being played through by Fortune Makaringe.

This sprung Swallows into life early in the contest, and they shot on target in the eighth minute through Lebohang Mokoena, who volleyed straight to Siyabonga Mpontshane in a clear signal of intent.

After being pinned back inside their own half, the pressure told on Pirates when Makaringe was deemed to have fouled Keletso Makgalwa inside the box.

The resultant penalty was taken by Ruzaigh Gamildien, who sent Mpontshane the wrong way to level matters in the 15th minute.

The visitors continued to contend with some pressure exerted by the home side, but held firm to keep things level.

Approaching the half-hour mark, there was some good combination play between Thembinkosi Lorch and Terrence Dzvukamanja near the edge of Swallows’ penalty area, before the latter’s curling effort floated just wide of the target.

The tempo dropped towards the halftime whistle, with the two sides seemingly content to head into the tunnel still level on the scoreboard.

There was a lively start to the second half,  but not enough in terms of penetration into the final third at either end.

The Buccaneers goal was threatened around the hour mark a couple of times with Paseka Mako making a vital block off the line to deny Kamohelo Mahlatsi before another crucial save from Mpontshane to stop Tebogo Langerman.

Meanwhile Pirates continued to seek the winner, and Makaringe could have provided just that had he directed his powerful shot from range in the 72nd into the back of the net after pouncing on a clearance from the Swallows defence.

Hotto had a couple more chances towards the end, first receiving the ball at the edge of the box before being muscled off the ball before almost forcing an own goal with a cross that was deflected towards goal by Wandisile Letlabika.

A stalemate was the end result, with both sides left to rue their chances in another entertaining instalment of the Original Derby.