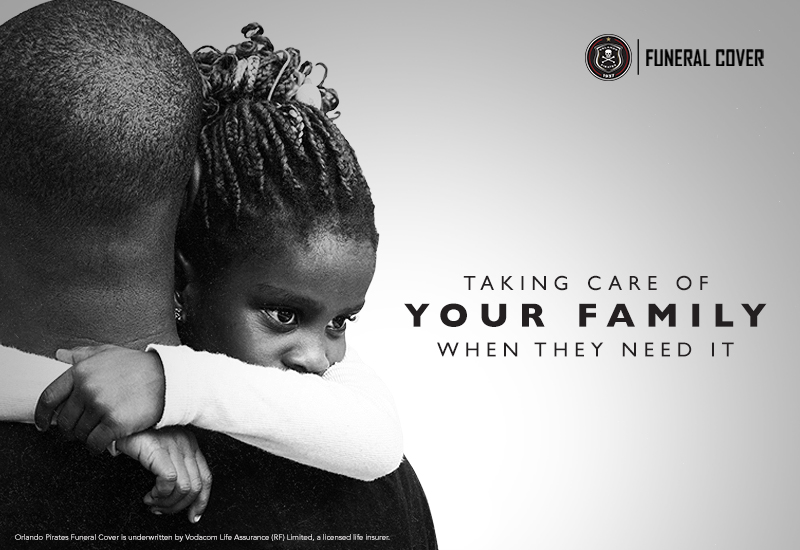 The Buccaneers have teamed up with Vodacom Life Assurance Company, a licensed life insurer to launch Orlando Pirates Funeral Cover to protect you against the unforeseen expenses during the toughest time for your family, and to help take care of the people that matter by offering affordable cover.

Supporters can sign up exclusively through the Orlando Pirates Official App and receive instant cover for up to 17 family members, with a maximum pay out of R50 000 when a loved one dies, paid within 48 hours of approval. What’s more, up to 10 children in the family are added at no additional cost.

Vodacom Life Assurance has made the process as smooth as possible with no paperwork, no medical exams, no blood tests and no brokers involved. It’s direct cover for those toughest of times for Orlando Pirates supporters and the South African community at large.

“Family is everything, and Orlando Pirates is a club that lives this every single day. As Vodacom we are proud to support the strong family bond between the club and its supporters by being there for them when they have to say goodbye to one of those special family members,” said Michelle van Eyden, Head of Sponsorship for Vodacom.

“When you lose a loved one, it should be a time to honour their life and not worry about the financial burden of funeral expenses. We want supporters to know that at such a difficult time, you are not alone. You are part of this family, and we’ve got you covered.”