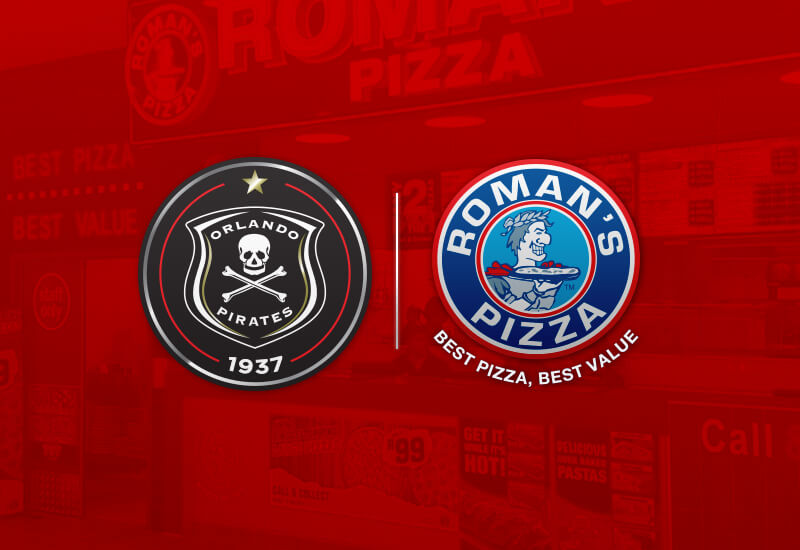 Orlando Pirates Football Club is proud to announce Roman’s Pizza as the Official Pizza Restaurant Partner to the Club.

A proudly South African company, Roman’s Pizza had a vision to provide the best quality product at the lowest price when it was founded in 1993, a vision that still drives them to this day.

Having over 230 stores nationwide and striving to always live up to its standard of providing the Best Pizza for the Best Value, Orlando Pirates fans will be sure to have a restaurant that supports their Club close to their homes.

“The Orlando Pirates brand is always looking at the best synergies between the Club and potential sponsors. Seeing the history of Roman’s Pizza in the country and its efforts to always provide great quality products for families at reasonable prices is an initiative that we encourage and want to be part of during these times where the economic outlook is a little bit tense”, said Joseph Bertrand, Brand & Sponsorship Manager, Orlando Pirates FC.

This innovative partnership will also reward the fans attending the Buccaneers home games in the Absa Premiership. Any fan that purchases a valid ticket to an Orlando Pirates home league match will be entitled to use their ticket as a voucher to receive R15 off a minimum purchase of R50 at any Roman’s Pizza outlet nationwide, within 7 days of the end of the matches.

“In a nutshell, an Orlando Pirates home match ticket now becomes a discount voucher for the Bucs supporters who bought a match ticket to support the Buccaneers at their home, Orlando Stadium. The Club and our partner Roman’s Pizza want to show our appreciation to the fans, by rewarding the Bucs Faithful that attend our home matches. This type of partnership is a first of its kind in South Africa and we are both happy and proud of this launch,” said Bertrand.

The Club and its new Pizza Restaurant Partner will also be launching a new Orlando Pirates Pizza meal in the next few months.

“Roman's Pizza is exceptionally proud to partner up with Orlando Pirates as the new Official Pizza Restaurant Partner. We are elated to have been selected and feel that the partnership serves various purposes, specifically one of unionship, where Pirates fans can simply enjoy the Best Pizza at the Best Value! It's a win-win situation! No pun intended!’’ said Bonnie Cooper, Chief Marketing Officer, Roman's Pizza.

Every Roman’s Pizza meal is made from the freshest and finest ingredients. Dough is made fresh all day long and all meals are prepared to order and are therefore guaranteed to be fresh, delicious and straight from the oven.

For a list of Roman’s Pizza stores and the T&Cs for the Orlando Pirates offers, visit www.romanspizza.co.za