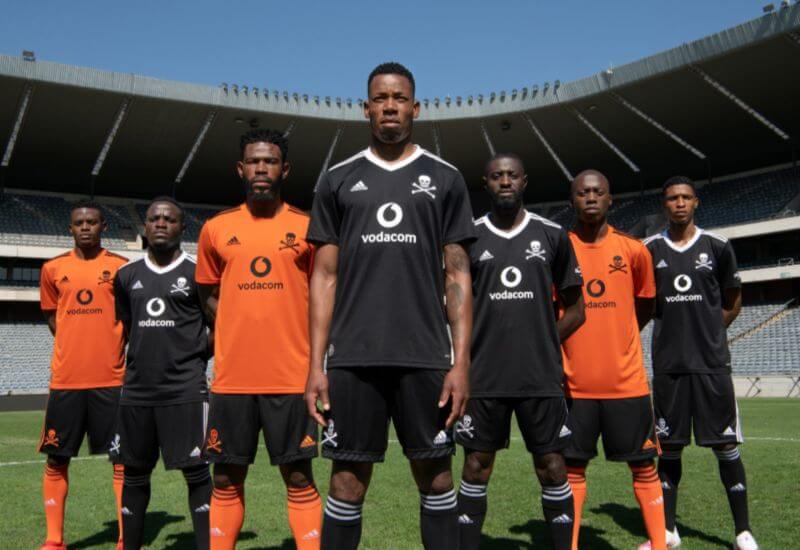 Orlando Pirates and adidas have unveiled the Club’s home and away kit for the 2020/21 season, with both jerseys getting a bold and modern update.

One of the big changes this season is that the Club’s traditional badge has been replaced with the skull and crossbones emblem on both jerseys. The away kit in particular is sure to get fans talking, with its striking orange colourway. It’s the first time in the club’s history this colour is being used, and it’s seen as an expression of confidence and vibrance that reflects the team’s spirit.

The new kit stays true to Pirates’ iconic black and white colours, with the home jersey in all black, with white stripes on the shoulder and a white v-neck.

The bold orange of the away jersey is finished off with the classic three black adidas stripes on the shoulders.

Continuing the modernisation of the Club’s classic iconography, the home shirt features AEROREADY, a technology that wicks sweat away, leaving players dry and comfortable during exercise.

In addition to the kit reveal, adidas released an Orlando Pirates #ReadyForSport video, narrated by new signing and national captain, Thulani Hlatshwayo, where he talks about what it means to him to join the Buccaneers. The new kit will be seen on-field for the first time during the opening weekend of the 2020/ 2021 PSL season.

“The striking design of our new kit shows that we’re constantly progressing and growing as a club, while retaining our distinctive visual identity and logo. The result is a kit that keeps the traditions that are woven into our heritage and DNA, while signaling a fresh era for South Africa’s most-loved team,” said Thandi Merafe, Media Officer of Orlando Pirates Football Club.

Bob Maphosa, Sports Marketing Manager for adidas South Africa said, “Orlando Pirates is a club that stands for innovation and confidence, while staying true to its roots. We focused on bringing unique elements to each kit, such as the iconic skull and crossbones and using orange for the first time in the club’s history.”

The new Orlando Pirates kit will be available for pre-ordering from September 29th, online at piratesshop.co.za and for sale from October 8th, 2020 at adidas.co.za, adidas concept stores and at selected sports retailers across the country at a retail price of R799.