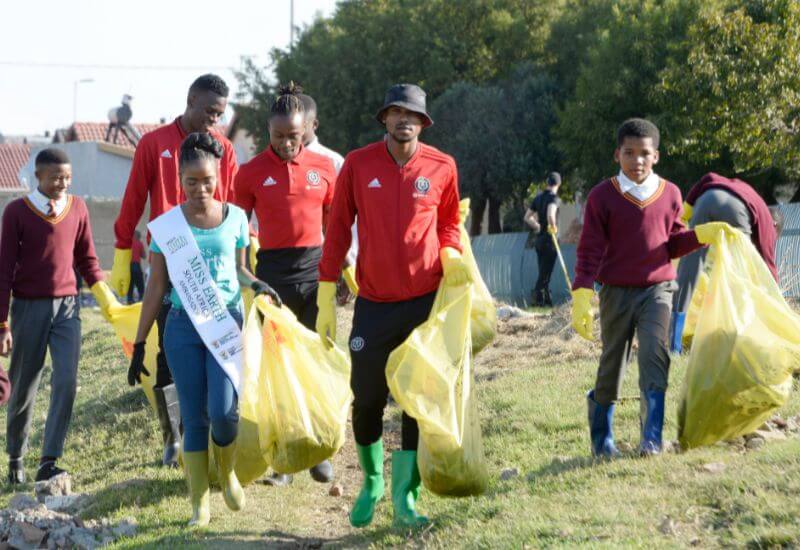 Orlando Pirates Technical Supplier, adidas, has a responsibility far greater than that of kitting out the Buccaneers in the latest performance apparel as both brands continue to lead in their respective fields. Beyond the four white lines of sport, the apparel giant is also a founder of the Parley for the Oceans global network which comes together to raise awareness for the beauty and fragility of the oceans and collaborates on projects that can end their destruction.

adidas works with Parley to up-cycle intercepted marine plastic waste for its re-purposed use in high-performance apparel and footwear. By the end of 2017 adidas had produced over 1 million pairs of footwear that contained Parley Ocean Plastic collected all along the coastlines across the globe. In 2018, the 5 million mark was surpassed, leading to the bold target of 11 million being set for 2019.

The Buccaneers joined forces with the global sportswear giant, by inviting learners from nearby schools in Orlando to participate in the clean-up operations of the river which runs below the Orlando Stadium in Soweto.

“When we heard about the movement, we immediately wanted to be involved. Orlando Stadium is our home, so it was important to start there in setting the tone and example in our community. We felt it was important to take a visible stand against the problem of plastic pollution, and also bring in the youngsters from the community so that they can also be a part of keeping their immediate environment clean,” said Tokoloho Moeketsi, Orlando Pirates Brand Activation Manager.

“It is of critical importance that we get the youngsters involved in the community clean-up initiatives. if the mindsight of taking care of the environment is instilled at an early age, then we are already in a better place to protect and maintain our planet for the future. We cannot shy away from marine pollution by taking the view that we live in the cities and townships. Every body of water eventually flows to the oceans, so it’s vital that even the rivers and streams that run through Soweto are clean. We have to be more vigilant. We must continue to educate those around us on the dangers of litter and pollution in the interest of the bigger picture – our planet!” concluded Moeketsi.

Lauren Haakman, Brand Communications and PR Manager for adidas South Africa echoed the sentiments, saying, “The marine plastic crisis we’re facing has become critically urgent. Every minute, the equivalent of a dump truck of plastic waste enters our oceans and by 2050, this could mean there may be more plastic than fish in our oceans.”

The clean-up was facilitated by Generation Earth, a green networking platform for the youth who strive to develop green thinkers of the future. The group of 100 included Orlando Pirates players, administrators, adidas staff, Miss Earth representatives and around 50 learners from the community.

Collectively, 200 Bags of refuse were collected in just over an hour.