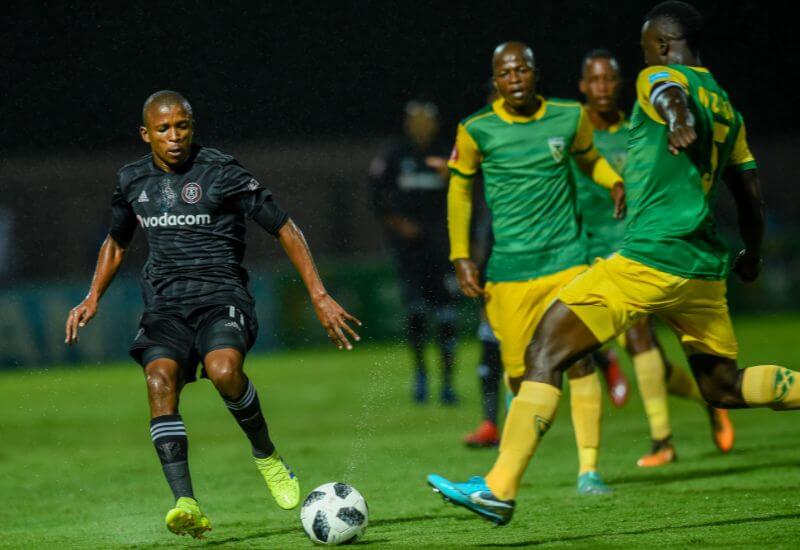 Orlando Pirates have celebrated a hard-fought and hard-earned 1-0 win over Golden Arrows at the Sugar Ray Xulu Stadium on Saturday night.

A first half goal from Justin Shonga was enough to see the Buccaneers claim all three points and with that, move into second place following Bidvest Wits' 3-2 loss to Cape Town City on the same night.

Pirates came into this game on the back of an emphatic 4-1 win over Amazulu and they were looking to claim another KZN scalp when they locked horns with Abafana Bes'thende who were winless in two.

It didn’t take long for the visitors to signal their intentions as they fashioned their first goal scoring opportunity in the 4th minute of the game.

Luvuyo Memela whipped in a cross to the far post but Kudakwashe Mahachi squandered his opportunity as is tame shot was easily saved by the keeper.

Pirates threatened again 10 minutes later this time from range as Ben Motshwari laid off a pass to Musa Nyatama who saw his goal-bound strike parried away for a corner kick.

The hosts produced their first shot at goal in the 18th minute from Danny Venter but his strike went harmlessly wide of target .

The match was swaying from one side to the other, with no team really dominating play, but as the pendulum swung it shifted the momentum in favour of Pirates.

In the 20th minute the Buccaneers capitalised on the opportunity as they scored the first goal of the match from a well-worked corner kick involving Thembinkosi Lorch, Memela, and Shonga, with the latter sending a left footed curler past the keeper.

The goal seemed to trigger Arrows into action as they stormed the Pirates goal in search of that all-important equaliser.

The three-man defence of Happy Jele, Innocent Maela and Alfred Ndengane were kept busy throughout the half but they were able to absorb the pressure from Arrows.

Pirates were dealt a heavy blow on the stroke of half time when talisman Motshwari was forced off due to what looked like a groin injury.

Pirates went into the break leading 1-0.

The second half started in similar fashion to the first as both sides exchanged blows in search of that crucial second goal of the match, but neither side was able to create any real threat as both teams extinguished any danger.

Near the hour mark Pirates began to build pressure around Arrows’ penalty area, with the hosts needing Nkosingiphile Gumede to be sharp in dealing with crosses and through balls behind his defence.

Pirates’ lead remained a tenuous one and they were unable to add to it, even in the 81st minute when a mistake in defence allowed Lorch a clear sight of goal – albeit from a tight angle – only for him to send a low shot flashing across the face of goal.

The game ended with neither side able to find the back of the net, much to the delight of the Bucs' Technical Team, who have now steered the Pirates ship to second place on the log table.

The Buccaneers next face a Bloemfontein Celtic side that held Mamelodi Sundowns to a goalless draw earlier today.

Ford Goal of the Month For March