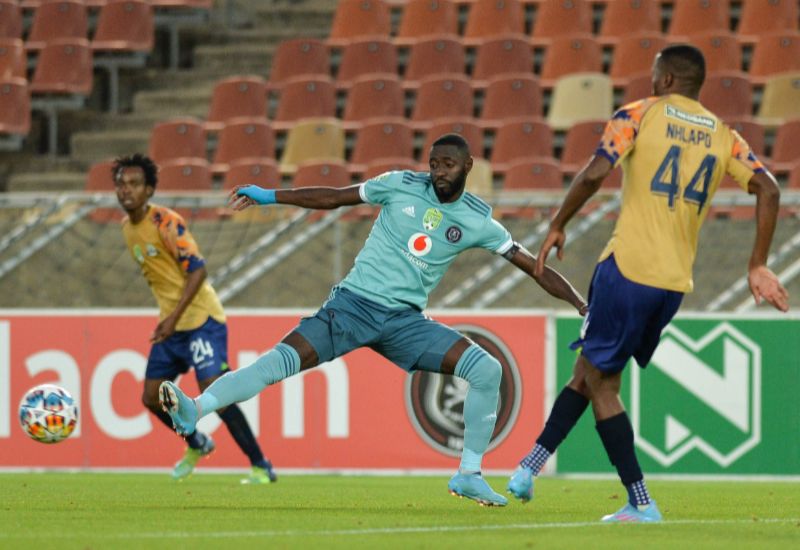 Orlando Pirates crashed out of the Round of 16 of the Nedbank Cup after falling short in the penalty shootout against Marumo Gallants, following a 1-1 stalemate at Peter Mokaba Stadium on Wednesday night.

The Buccaneers had entered the Round of 16 courtesy of a 1-0 home victory over fellow DStv Premiership outfit AmaZulu, and that set up another date with a top flight outfit in the hosts, who had beaten Santos at the same venue  in the previous round.

Bucs keeper Richard Ofori, who was returning from a long injury lay-off, was the first of the two glovemen to be tested when he was summoned off his line to stop a marauding Ndabayithethwa Ndlondlo just seconds after kick off.

The home side continued to look threatening as they pushed forward, and the pressure told on the visitors in the 20th minute when skipper Happy Jele was penalised for fouling Joseph Molongoane inside the box.

Ndlondlo stepped up to take the spot-kick, placing it low to Ofori’s right into the back of the net after the Ghanaian international had guessed correctly.

The wait for the equaliser was not a long one for Pirates, with only 10 minutes elapsing before Shandu found a way behind the defence to meet a pass from deep before finishing past King Ndlovu.

Six minutes from the break, Thabang Monare found himself in a shooting position after some brilliant interplay with Deon Hotto, but sent his shot straight to the Gallants shot-stopper.

The first half finished level, and the Buccaneers were quick off the blocks in the second 45, finding an early opportunity through a set piece taken by Hotto, who struck the upright with his left-footed shot before the rebound rushed Kwame Peprah as he knocked the ball into Ndlovu’s hands.

Kabelo Dlamini also got close on the hour mark, heading just wide from the edge of the box, and had another opportunity 10 minutes later when he narrowly missed the target with his foot this time around.

With the clock winding down, opportunities dried up at both ends, with both keepers only called upon to make comfortable stops.

The game headed into an extra 30 minutes which began without incident until nine minutes in when Tshegofatso Mabasa rattled the upright with a well-struck shot from right on the edge of the box.

Gallants had the opportunity to steal it at the end when Molongoane pounced on miscommunication from the Pirates defence, only to spurn his chance.

Ofori thwarted another chance that fell to the hosts, when he made a fine save to deny Ndlondlo from a set-piece situation.

Penalties were next after no winner could be decided in 120 minutes of play, and a dramatic shootout ensued.

Things began with some well-taken spot-kicks from Jele, Monare and Hotto, while Gallants’ Ndlondlo and Tshepo Gumede also made no error.

Molongoane opened the door for the Buccaneers, sending his shot wide of the target before Mabasa gave Pirates a 4-2 lead.

Sibusiso Sibeko made it 4-3, and a miss from Olisa Ndah allowed Sibusiso Khumalo to make it 4-4.

Sudden Death began with a miss from Linda Mntambo, before Ofori pulled off a good save to stop Miguel Timm.

Ndlovu emulated his opposite number to keep out Terrence Dzvukamanja, and stepped up to take what would be the final spot-kick to send the Buccaneers out of the competition.