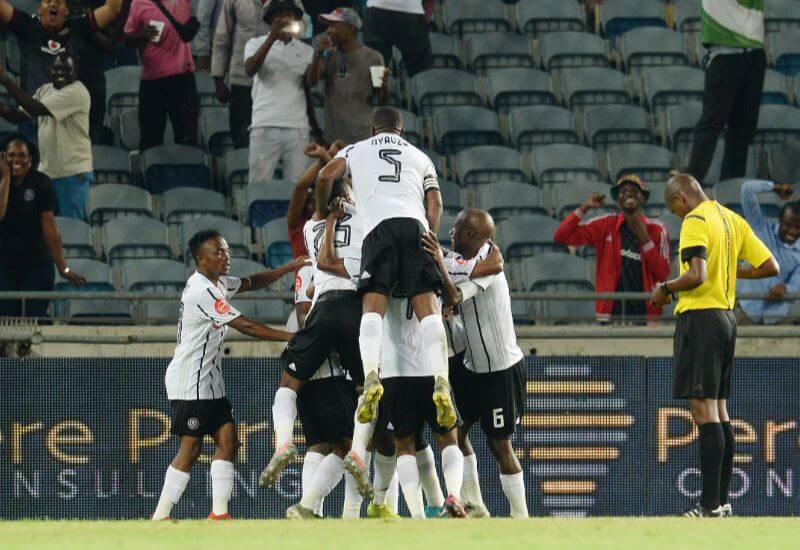 Orlando Pirates bagged all three points by scoring as many goals in a 3-2 league win over Polokwane City at Orlando Stadium on Tuesday night.

The Buccaneers were winless in three matches, going up against a side that had gone twice as many games just registering defeats.

Their first real opportunity came as Gabadinho Mhango found himself in the box, but laid the ball out for Ben Motshwari, who shot into the keeper's hands.

There was immediately a chance at the other end as Simphiwe Hlongwane spotted Wayne Sandilands off his line, but his shot sailed over the crossbar.

As soon as Polokwane spent a considerable amount of time in the opposition half, Charlton Mashumba opened the scoresheet, despite Sandilands' best efforts to keep the ball out.

A lifeline was eventually handed to the Buccaneers when Referee, Masixole Bambiso ruled that a handball had been committed inside the box.

Gabadinho Mhango was the man entrusted with putting Pirates level, and he obliged in bagging his third goal in as many appearances.

Vincent Pule could have grabbed a second, barely seconds later, as his shot was directed off the net by Cyril Chibwe, who pulled off a reflex save to keep him out.

While the crowd recovered from that, an altercation in middle of the park changed the complexion of the game.

Puleng Tlolane and Thembinkosi Porch were engaged in a clash which necessitated sanctions for both players, who saw red to reduce the number of active participants to ten for either side.

Ten each is how both sides went into the tunnel, which meant a huge 45 minutes was to come.

After concentrated dominance, but not many opportunities, Pirates looked to test the Polokwane goal.

The first real chance came inside the 55th minute via Pule, whose effort was tipped over the bar by Chibwe.

Replacements would do the trick for the Buccaneers, as Kabelo Dlamini and Tshegofatso Mabasa connected - on either side of a touch from Ntsikelelo Nyauza - to put the hosts ahead in the 68th minute.

Ten minutes later, Dlamini could have gotten his name on the scoresheet, but had to wait just seconds later, as his effort hit the woodwork on its way to providing Pirates with a crucial corner.

From the set piece, the former Celtic man had the final say with a shot that put the hosts 3-1 up.

However, a defensive lapse allowed a nervy finish for the Buccaneers, whose lead was reduced to one by Mpho Mvelase, who shot unopposed to breach Sandilands' defencesnonce more to make it 3-2.

A brilliant turn from Jabulani Maluleke could have drawn the visitors level, as it was turned towards goal by Mohammed Anas, but the Bucs keeper was alert, keeping the hosts ahead in what would be the last action of the game.