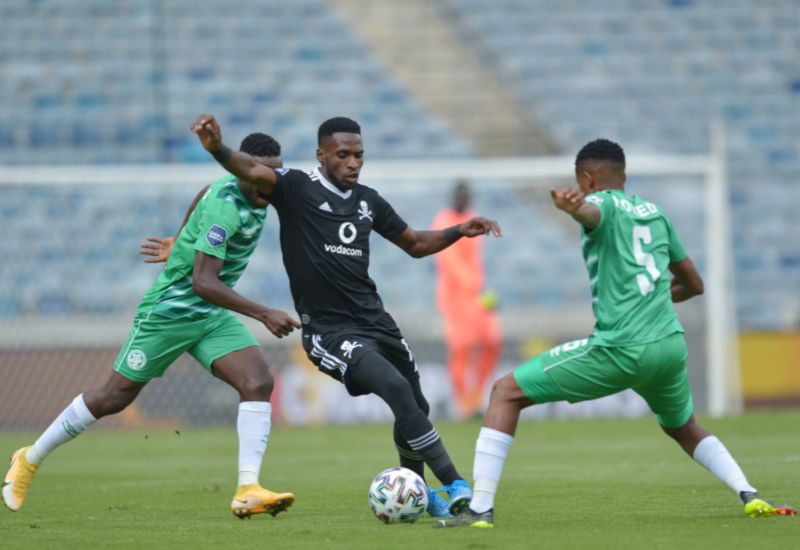 Orlando Pirates were victorious on their return to league football, beating a ten-man Bloemfontein Celtic 1-0 at Orlando Stadium on Tuesday.

In their first home league game since early February, the Soweto Giants were looking to secure a double against the men from the Free State, who they also secured a famous cup win against.

The hosts were quick off the blocks, getting close to finding the opener in the first minute through Vincent Pule, but the defence was quick to scramble back and snuff out the danger.

Clear-cut chances were few and far between in the early stages of the opening 45 minutes, despite the Buccaneers' control over proceedings.

Deon Hotto could have opened the scoring in spectacular fashion in the 39th minute, when he adjusted acrobatically to meet a cross from Pule, but failed to direct his bicycle kick into the net.

Just before the break, Siphesihle Ndlovu forced a good save from Celtic keeper Jackson Mabokgwane, when he volleyed a looping ball from point-blank range on target.

The biggest talking point of the half was a dangerous tackle copped by Linda Mntambo in the hands of visiting skipper Ndumiso Mabena, whose studs-up challenge earned him his marching orders.

Buoyed by the numerical advantage, the Buccaneers came out of the tunnel looking more assured.

The intent was signaled in their first surge into the Celtic half when Vincent Pule drove forward before shooting for goal, missing the target by centimetres.

At the other end, Bucs keeper Richard Ofori was also tested, pulling off great saves to deny Victor Letsoalo, and later Lucky Baloyi from close range.

The breakthrough eventually came two minutes after the half-hour mark, through some individual brilliance from Fortune Makaringe, who beat a succession of defenders, creating some space before shooting into the bottom corner to hand the Buccaneers the lead.

Pirates' lead could have been doubled just seconds later, when Paseka Mako made one of his trademark overlapping runs into the box, before attempting to place one beyond Mabokgwane's reach, but the former Bucs goalminder was alert to the danger.

Despite being a man short, the visitors showed great determination towards the end, inducing a couple of nervy moments for the Buccaneers camp.

However, the hosts continued to control proceedings, eventually securing three crucial points to move up to third in the standings.