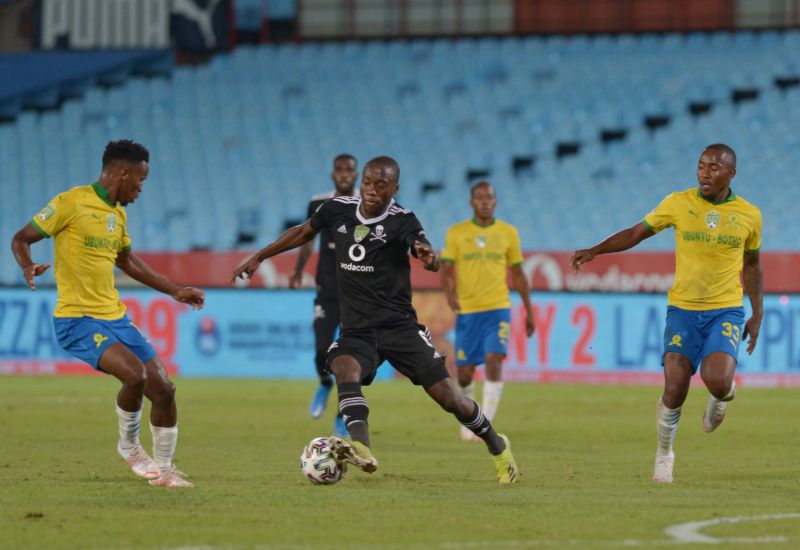 Orlando Pirates endured a nightmarish evening at Loftus Versfeld, where they crashed to a 4-1 defeat at the hands of Mamelodi Sundowns to bow out of the quarterfinal stage of the Nedbank Cup on Thursday.

The two teams were battling it out for the remaining semifinal spot, with the other three already decided.

It was the worst possible start for the visitors as, with just 12 minutes played, the dangerous Peter Shalulile was played in by Rivaldo Coetzee with a superb long ball before picking his spot at the back of the net, evading an outstretched Wayne Sandilands.

That gave the hosts the lead, prompting a response from the Soweto Giants, who had taken some time to hit their straps.

With the half-hour mark approaching, it was, however, Sundowns who came the closest to scoring, but the Bucs defence scrambled well after a lapse in concentration led to Shalulile and Themba Zwane sniffing a chance with Sandilands off his line.

The let-off was the tonic Pirates needed it seemed as Tshegofatso Mabasa shot from close range after a move which began with an intercept from Ntsikelelo Nyauza at the other end, with Deon Hotto and Gabadinho Mhango combining well before the in-form number 9 made it 1-1 in the 33rd minute.

With the visitors controlling proceedings, they had two opportunities to go 2-1 up before the break, with both chances falling to Mhango.

The Malawian international was first denied by the crossbar before an outstretched leg from Rushine de Reuck helped toe the ball away from his possession while one-on-one with Denis Onyango.

While there was nothing to choose between the two sides in the first half, the second half was a different story, with Sundowns turning it up a gear from the get-go.

The defending champions' lead was restored in the 49th minute when Themba Zwane danced around the defence before slotting in from a tight angle, with Paseka Mako's desperate stretch failing to keep the ball out.

The Bafana midfielder then added an assist to his tally, playing in Lesedi Kapinga, whose shot hit the upright before crashing into the back of the net to make it 3-1 in the 75th minute.

More spaces were created at the back, with the Buccaneers eager to pull one back, and it was 'Downs stalwart Hlompho Kekana who wrote his name on the scoresheet with a trademark strike from range in the 86th minute to cap a forgettable night for the Soweto Giants.

From there on, any goal that would have gone the way of the visitors would have served as mere consolation, and none were forthcoming as the Brazilians marched on to a convincing victory.

HAPPY JELE: A CALL TO ARMS
Read More
PIRATES AND ADIDAS FIGHT PLASTIC POLLUTION
Read More
And Then There Were 16
Read More