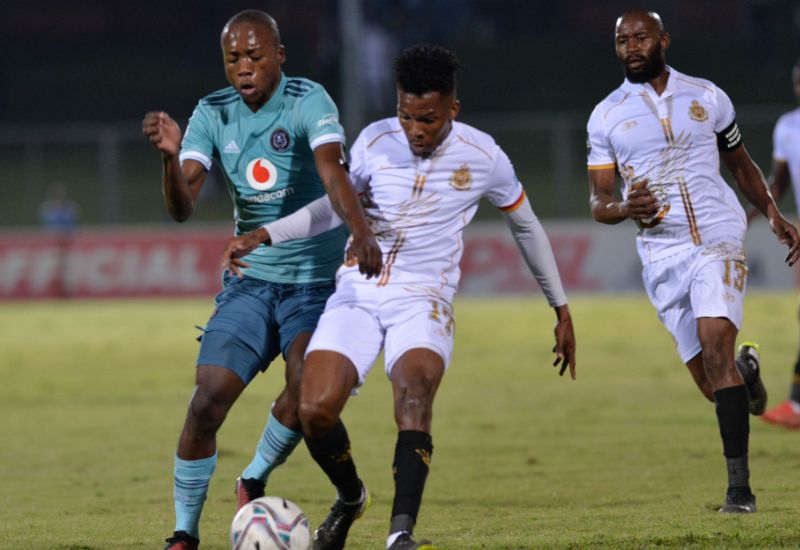 Orlando Pirates had to settle for a share of the spoils on their visit to Royal AM, whose late fightback ensured that equal points would be shared in a 2-2 DStv Premiership stalemate at Chatsworth Stadium on Friday night.

In their second outing in the space of a few days, the Soweto Giants looked for no less than three points in an encounter against a side eyeing a return to winning ways after a few unsatisfactory results in their most recent league outings.

The only change in the Bucs starting personnel was made at the back, where Club Captain Happy Jele moved to the bench, relinquishing the armband to Ntsikelelo Nyauza, who was the only new player brought into the XI on the night.

While the big switch was made at the back, it was the men on attack who made a telling contribution early on as a long ball from the in-form Thembinkosi Lorch early on found Deon Hotto, who turned it past Marlon Heugh into the net to make it 1-0.

The dream start continued for the Buccaneers, who were two-up after another smart delivery from Lorch to Hotto, which this time around was steered into the direction of Kwame Peprah, who headed in from close range to make it 2-0 in the seventh minute.

The middle period of the first half was mostly half-chances on both sides of the field, with Richard Ofori barely tested on his end, while Royal AM’s offside track kept the Pirates attackers at bay.

The home side had a promising period towards the break, enjoying a succession of set-pieces deep in the Soweto Giants territory, but without much joy as Ofori, along with Olisah Ndah and Nyauza were all on top of the threat posed by Thwihli Thwahla.

While the home side spent a fair amount of time camped inside the visitors’ half of the field in the second hal, the Buccaneers’ surges forward were more of the counter-attacking variety, with the hosts’ defence well on top of things in cutting off Pirates’ delivery into the final third, where the likes of Peprah and Hotto constantly lurked.

Bandile Shandu could have extended the lead with a spectacular overhead kick in the 77th minute, but failed to make the necessary connection to send the ball into the net.

Pirates were left to rue that missed opportunity when ex-Bucs skipper Thabo Matlaba provided a moment of magic soon after, cutting inside before unleashing a trademark long-range strike, which beat the despairing Ofori to half the deficit for the hosts.

Defending a one-goal lead in the final ten minutes, Pirates still looked to have things under control, but Royal AM were not letting up in their pursuit for the equaliser.

The home side’s comeback was completed well into injury time when Mfundo Thikazi’s shot evaded all inside the box, including Ofori, to make it 2-2 with very little remaining on the clock.

There was not enough time for Pirates to reclaim their lead, and what was an entertaining contest ended with the two sides sharing a point apiece with the Soweto Giants left with one game to play.