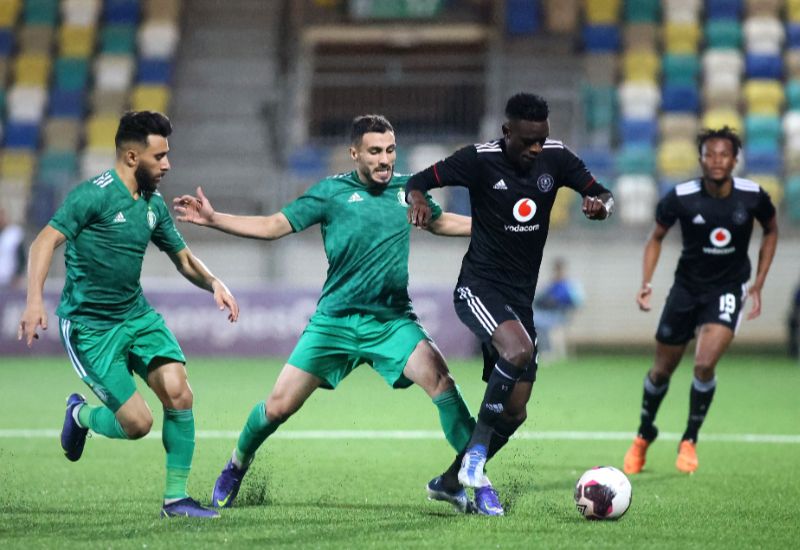 Orlando Pirates have one foot in the CAF Confederation Cup final after scoring a handy away win, beating Al-Ahli Tripoli 2-0 in the first leg of their semifinal tie played at Martyrs of February Stadium on Sunday.

The victory puts them in good stead ahead of their home leg of the tie, which is scheduled to take place at Orlando Stadium next weekend.

With pressure applied on the home side’s defence early on, it did not take long for the visitors to get themselves on the scoresheet, as Innocent Maela positioned himself perfectly to pick up the ricochet from a save made by Mohamed Nashnush before guiding it into the back of the net for the game’s opener eight minutes in.

The pendulum swung in favour of the hosts in terms of possession, as they launched a few attacks in the Bucs half, but without much success as the visitors maintained their shape on defence.

There was a more clinical showing at the other end, with Kwame Peprah doing well from the flank to free himself up to cross one into the box before a deflection fell luckily for Goodman Mosele, who gathered the ball from just inside the penalty area before making it 2-0 in the 29th minute.

Mohamed El Fakih got close via a set piece on the stroke of halftime, but the South African side would not concede heading into the tunnel.

Half chances greeted the Buccaneers early in the second half, with Peprah and Thembinkosi Lorch both getting some shots in, before Deon Hotto got in on the act with a shot that forced a save off Nashnush one minute from the hour-mark.

Issues with the floodlights threatened to curtail the game as a spectacle, with two unplanned intervals seemingly playing in favour of the hosts, who emerged from the restarts with guns blazing, but there was no way through a disciplined Bucs defence.

A vital victory was soon registered by the Buccaneers, who will head into Sunday’s second leg fixture with the upperhand, following a straightforward performance away from home.