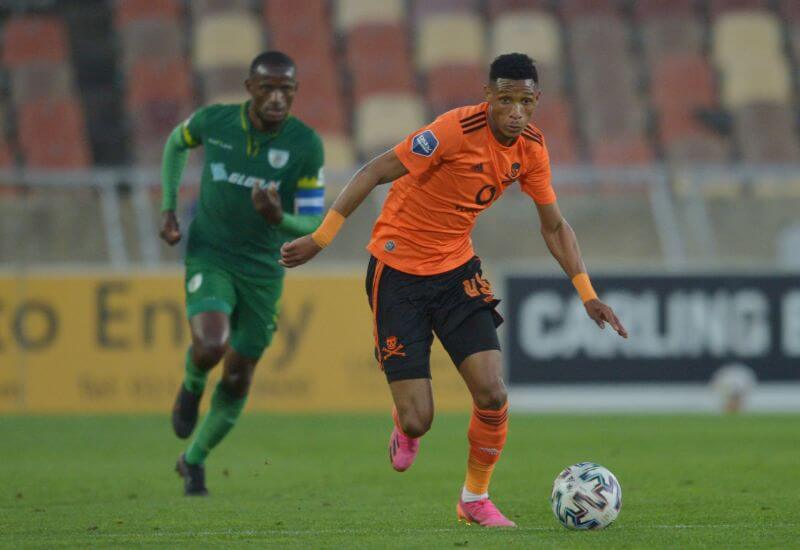 Orlando Pirates displayed great character in their last away league fixture of the 2020/21 season, where they came from behind to claim a 2-1 victory over Baroka at Peter Mokaba Stadium on Wednesday.

In their second game on the road in the space of a few days, the Buccaneers were looking to bounce back after defeat in their last outing.

The first half was characterised by spurned chances from both ends, but the hosts eventually celebrated when Denwin Farmer's shot from the edge of the box beat a sea of orange shirts to take his side into the lead seconds from halftime.

Just as it appeared as if Pirates would head into the tunnel trailing, they were awarded a free kick just wide of the home side's penalty area.

Gabadinho Mhango - whose strike from a set-piece made the difference in the Buccaneers' most recent victory - was again the man of the hour, striking one into the back of the net with some venom.

This sent the two sides to the break level on the scorecard, and it could have been 2-1 in favour of the visitors just six minutes after the restart. However, after pouncing on a loose ball, the Malawian international's shot from close range was blocked by Baroka keeper Oscarine Masuluke.

Another chance fell to the Buccaneers on the hour-mark, this time with Mhango playing the role of the provider. It was skipper Happy Jele with an opportunity at goal in that particular instance, but the veteran defender miscued his header.

Terrence Dzvukamanja was introduced late into the game, and that proved to be an inspired change as the attacker's entry proved crucial.

The 27-year-old headed in after being pinpointed by a fine cross from Wayde Jooste, giving the Soweto Giants the lead with just two minutes of regulation time remaining.

Despite the hosts' efforts, the result was sealed eventually, with the visitors hanging on for a vital three-point haul ahead of the final round of fixtures.