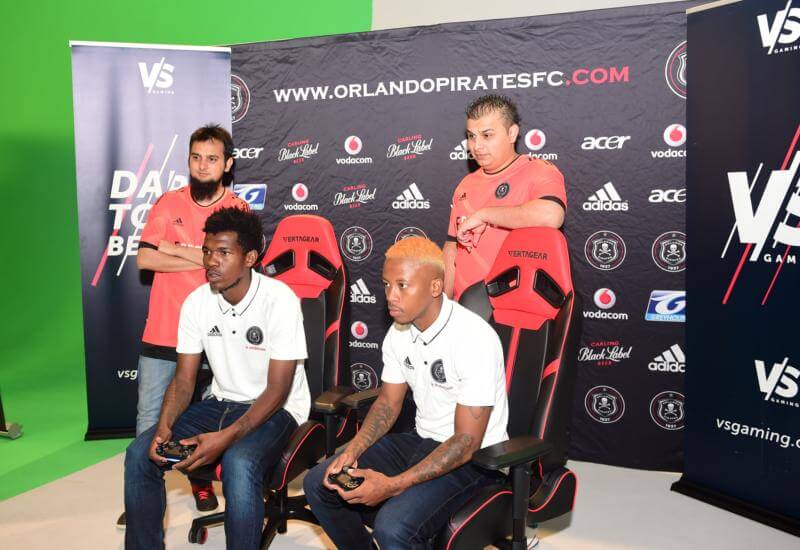 On November 7th, Orlando Pirates capitalised on the FIFA break and hosted an internal FIFA18 tournament. The group stages featured two groups: Group A consisted of eSports players @PiratesAbu, @Shuaib07, @8Zaidy8, @Sattar1STR and @Tebza; and Group B held Thabo Rakhale, Thabiso Kutumela, Happy Jele and Ayanda Nkosi from the Orlando Pirates First Team. The event saw each group battle it out against each other in a round robin format to distinguish the Top 2 from each group.

Thabo Rakhale and Ayanda Nkosi reigned supreme in Group B along with @8Zaidy8 and @Shuaib07 from Group A. This past week has been building up to tonight’s grand final with players taking to social media to challenge each other.

On Instagram, @8Zaidy8 started the friendly banter off by suggesting he would teach @Rakhale25 a thing or two in tonight’s final, inevitably @Rakhale25 replied within a few hours with lessons of his own for @8Zaidy8. Twitter was @Shuaib07’s chosen social platform to call out @Ayanda20Nkosi who claims he can out-skill any game.

With these four players already heated and ready to play, tonight’s highly anticipated event is bound to be both thrilling and entertaining.

#PiratesPlayoffs will be streamed live at 19h00 from the official YouTube channel of Orlando Pirates, PiratesTV. Be sure to tune in and catch all the FIFA18 action.