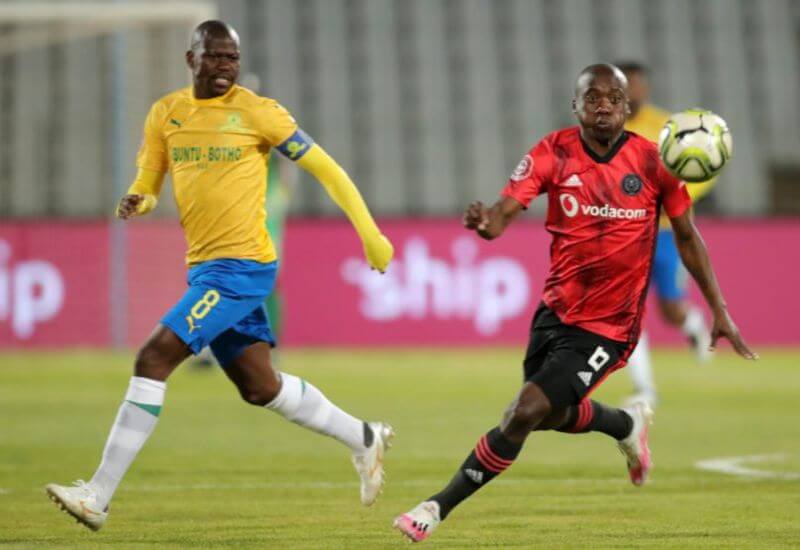 The first league fixture of the restart ended in a goalless draw as neither Mamelodi Sundowns nor Orlando Pirates could find the net at Dobsonville Stadium on Tuesday evening.

It had been 157 days since the Buccaneers took part in a competitive fixture, while the Brazilians broke their lengthy hiatus over the weekend with a cup fixture against Bidvest Wits.

This was quite evident early on in the encounter, with both sides lacking a bit in terms of sharpness.

It took until just over the 20-minute mark for a shot in anger, as Sphelele Mkhulise whipped in a cross to Themba Zwane, who forced a superb save on the near post from Wayne Sandilands.

Pirates' first really threatening foray forward came in the 38th minute when Fortune Makaringe and Abel Mabaso connected well, with the latter whipping in a cross which was intercepted by Denis Onyango.

The next came five minutes later, with Vincent Pule pouncing on lax defending from Sundowns, only for his shot to hit the side-netting.

In the second half, the Buccaneers were the first off the blocks with Pule trying his luck from range, but managed to shoot well wide of the target.

An even better chance fell for Makaringe in the 57th minute when he sliced past the Sundowns defence, beating Onyango with his shot at goal before being denied by the upright. The hosts managed to clear the danger in the resulting scramble.

At the other end, Mkhulise went on a terrific run, ghosting past a few defenders before Innocent Maela made a telling clearance to keep the danger out.

Not shy to throw the dice, Pule got in a position to send a cross into the box, but tried to catch Onyango off guard by going from goal instead. The Ugandan international was alert to the danger, punching the ball over the bar.

More chances fell to Pirates, with Ntsikelelo Nyauza the next to come close with a header from a set-piece.

Paseka Mako was soon denied also, as he came one-on-one with Onyango, only for Motjeka Madisha to sneak in a decisive last-gasp tackle.

The Buccaneers' dominance in the second half was not rewarded in the end, as things ended goalless.