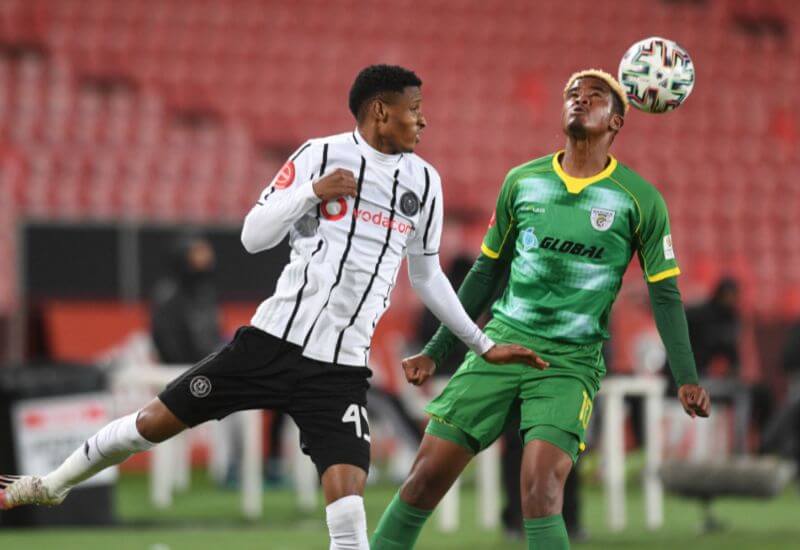 Orlando Pirates returned with another disappointing result on Tuesday night, as they were held to a one-all draw by Baroka at Emirates Airline Park.

The Soweto Giants went into their second home fixture since the restart looking to break their goal-drought, having been held to a scoreless draw in their last outing.

As was the case in their two previous fixtures, the Buccaneers began in a subdued manner, and started kicking into gear as the clock approached the 10-minute mark.

Making a rare start, Tshegofatso Mabasa did some fine work to break free on the far side, but his delivery into the box evaded everyone.

The move to start the 23-year-old proved to be an inspired one, as he broke the team’s lengthy goal-drought in fine style in the 16th minute, pouncing on poor communication from the visitors’ defence to make no mistake in finishing from a tight angle. The goal was the seventh for the striker, who has featured in the starting lineup seven times this season.

Baroka did not hesitate in searching for the equaliser, as Thamsanqa Masiya troubled Pirates on the right flank before sending in a threatening cross, which required intervention from Wayne Sandilands, who decided to come off his line with a diving punch to clear out the danger.

The veteran shot-stopper was again called upon as Baroka attacked again in the first minute after the cooling break, as he had to dive to his left to keep out a snap-shot from Goodman Mosele.

A period of sustained attack from Bakgakga paid off in the 35th minute - albeit under controversial circumstances. This was when young striker Evidence Makgopa tapped home to draw level.

However, replays showed that the 20-year-old was some inches ahead of the Bucs defence when he received the ball, but the goal stood as the flags stayed down.

Pirates were awarded a free-kick within goal-scoring range, and Vincent Pule’s curling effort looked destined for the back of the net, but Elvis Chipezeze was on hand to make a superb save.

The Zimbabwean gloveman continued to stand in the way of a possible Buccaneers goal in the second half, again blocking Pule in the 64th minute.

He could have quickly turned villain soon after as he failed to gather a cross from second-half sub Thembinkosi Lorch, but there was no Pirates player close enough to the ball’s path to punish the error.

That proved to be the last real chance at another goal for the men in black and white, who registered a second successive league stalemate against the Limpopo outfit.