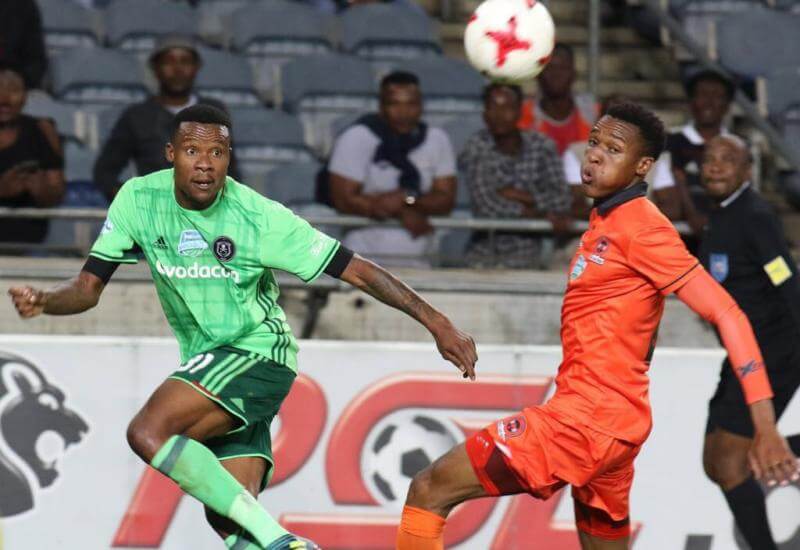 Orlando Pirates have been dumped out of the Telkom Knockout Cup after losing 4-2 on penalties to Polokwane City at Orlando Stadium on Saturday night.

The game was deadlocked at 2-2 after 120 minutes of football with all four goals coming in the first half of regulation time.

Pirates were behind as early as the second minute when Rodney Ramagalela played a beautiful cross for Rendani Ndou to head home from inside the Pirates box to make it 1-0 to Polokwane.

The hosts then took control of the match with Musa Nyatama dictating terms in the middle of the park for the Buccaneers.

Pirates deservedly levelled matters through Ntsikelelo Nyauza, who punished the Polokwane defence, to make it 1-1 in the 13th minute.

Polokwane then conceded a penalty 12 minutes later after Pirates striker Thamsanqa Gabuza was fouled by goalkeeper George Chigova. Mpho Makola stepped up only to be denied by Chigova, who sustained an injury in the process and he was duly replaced by Harold Ndlovu.

Bucs were left to rue that missed chance as Ndou completed his brace with a powerful low shot to make it 2-1 to Polokwane in the 41st minute.

But Rise and Shine were unable to hold onto their lead once again as Makola made amends for his missed penalty, making it 2-2 with a header as the half drew to a close.

The Buccaneers started the second half brightly, with Orlando Pirates head coach Milutin Sredojevic making his intentions clear as he introduced striker Thabiso Kutumela in the 58th minute.

The former South Africa Under-23 international tried to make an immediate impact, but he was denied by Ndlovu at the near-post.

City were happy to sit back and launch quick counter-attacks with Ndou and Ramagalela looking dangerous upfront for the visitors in the latter stages of the game.

The match ended in a 2-2 draw after regulation time and extra-time followed, with Pirates unable to capitalise on their dominance.

Wayne Sandilands produced a brilliant save to deny Sibusiso Mbonani in extra-time, while Ndlovu was forced into two great saves by Thamsanqa Gabuza. But, ultimately the game would be decided by means of a penalty shootout.

Polokwane duly emerged victorious with a 4-2 score line from the spot, after Pirates defenders Marc van Heerden and Nyauza missed their respective spot-kicks.