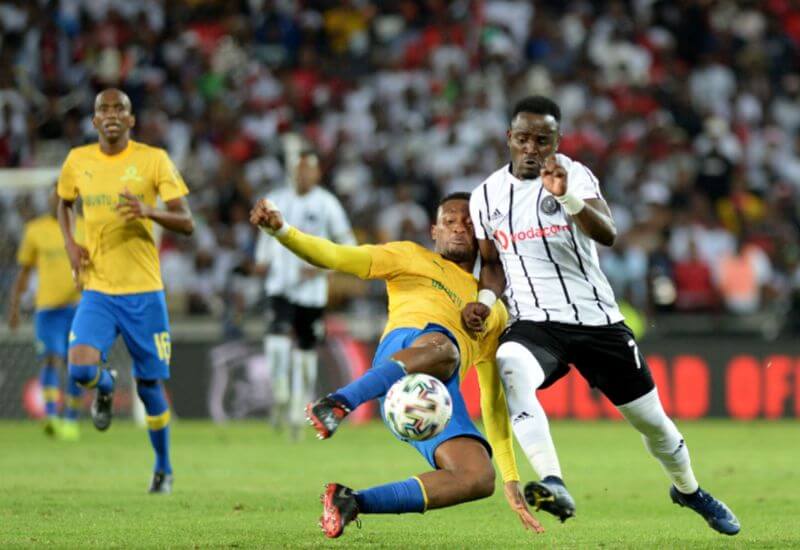 A near-sellout crowd at Orlando Stadium witnessed Orlando Pirates grab another vital three points, this time against Mamelodi Sundowns via a 1-0 win.

The Buccaneers went into the clash as slight underdogs against the defending champions, despite a morale-boosting heavy win in their last outing.

It wasn’t the most assured of starts for the hosts, who found themselves at the mercy of ‘Downs' captain, Hlompho Kekana’s big, booming boot from a set-piece situation as early as the second minute.

This was after his Buccaneers’ counterpart, Happy Jele fouled Sibusiso Vilakazi at the end of the box.

However, the veteran midfielder’s shot failed to trouble Wayne Sandilands, as it sailed well over the bar.

This was immediately followed by a period of Pirates growing into the game, but their first real chance only came in the 12th minute, after the dangerous Gabadinho Mhango intercepted a pass from the Sundowns defence, setting up Luvuyo Memela, who shot straight to Denis Onyango.

They could have found themselves chasing the game from inside 15 minutes, as Anele Ngcongca connected with a pass via a header inside the box, beating the diving Sandilands, but the upright intervened, followed by favourable bounce for Pirates which allowed Ntsikelelo Nyauza to make a vital clearance.

Moments later, “Mfundisi” was required to show what he’s made off, as he pulled off a brilliant save to keep out a Thapelo Morena stinger, with the men in yellow rediscovering their feet after a bit of a quiet period.

After struggling to penetrate their opponents’ astute defence, it was again Gabadinho Mhango who delivered the decisive touch - going one-on-one with Onyango, whom he easily beat after superb inter-passing down the middle from Fortune Makaringe and Memela.

This put the Buccaneers ahead on the halfway-mark, and they could have gone two-up ten minutes later when Thembinkosi Lorch short directly at goal from a free-kick, only for the Ugandan shot-stopper to snuff out the chance.

Going into halftime, it was Sandilands’ turn to return the favour, grabbing hold of a Morena header to keep his side in the lead.

The second half was all about controlling the tempo for the Soweto Giants - and possibly extending their lead - while keeping the opposition out.

Sandilands did his part in maintaining the lead, albeit with more assistance from the post.

Lebogang Maboe could have had the equaliser with his first touch late in the game, but the upright proved decisive once again.

It was desperate times for the reigning league champions, whose pursuit for the equaliser was not yielding much fruit.

A last-gasp free-kick, taken by Kekana, was their best chance near the end, but he once again skied his effort, as Pirates neared victory.

The result was soon sealed as the Buccaneers kept their unbeaten record under new coach Josef Zinnbauer, with their third win in their last four.