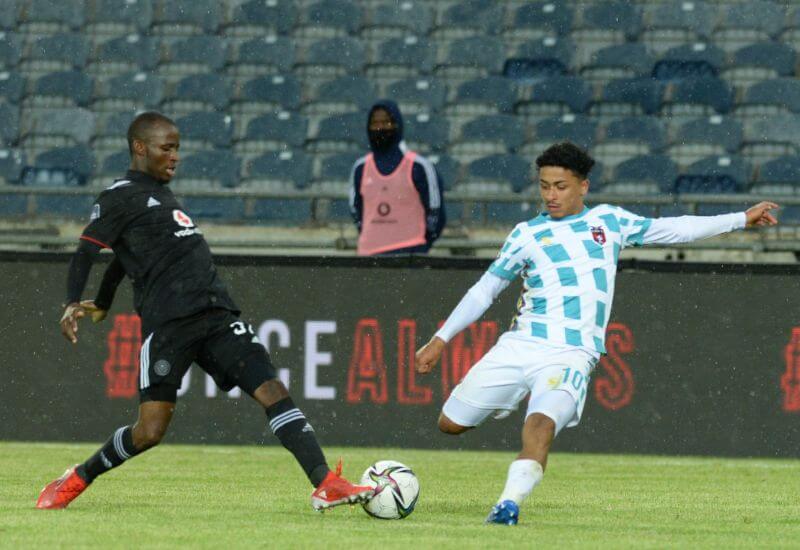 A goal in each half handed Orlando Pirates a 2-0 win over TS Galaxy in their DSTV Premiership fixture held at Orlando Stadium on Saturday.

Back on home turf, the Soweto Giants looked to break their streak of two consecutive draws, which both came in games they dominated in both territory and possession, but without any of that reflecting on the scoreboard.

Without much in goalmouth action inside the first opening 10 minutes, it looked as if the hosts were set for another frustrating afternoon.

This was until the 14th minute when Bandile Shandu opened his Buccaneers account after receiving a fine ball from Deon Hotto. The 26-year-old had to take two bites at the cherry after an initial block from Marlon Heugh, which he followed up with a powerful shot into the roof of the net.

Pirates’ lead could have doubled on the 30-minute mark, if it wasn’t for the upright having the final say. This is after Hotto threaded the ball to Kwame Peprah, who did everything right in running the correct angle before toeing the ball past Heugh before being denied by the post.

Five minutes later, Shandu almost had another decisive touch when his inviting cross into the Rockets’ penalty area was almost turned into the back of the net by Given Msimango.

Pirates headed into the tunnel with a slim lead, which they kept for just five minutes in the first half as it doubled when Hotto calmly maneuvered his way into a position to shoot from close range before teeing the ball up for Collins Makgaka, who shot past Heugh to make it 2-0.

The lively Shandu was again in an advanced position eight minutes later, unleashing a shot from range, which forced a save from the Galaxy shot-stopper.

The Rockets then enjoyed a period of ascendancy, pinning the Buccaneers inside their own half, but without causing much trouble in the final third.

Siyabonga Mpontshane, who had had very little to do throughout the encounter, was sprung into action in the 76th minute when he had to pull out the acrobatics to deny Masilake Phohlongo.

Pirates sought to finish the contest on a high as they broke into a counter in the final minute of injury time before Thembinkosi Lorch’s chip over Heugh failed to find the target.

It finished 2-0 as the Buccaneers claimed all points on offer to climb to second place in the standings.