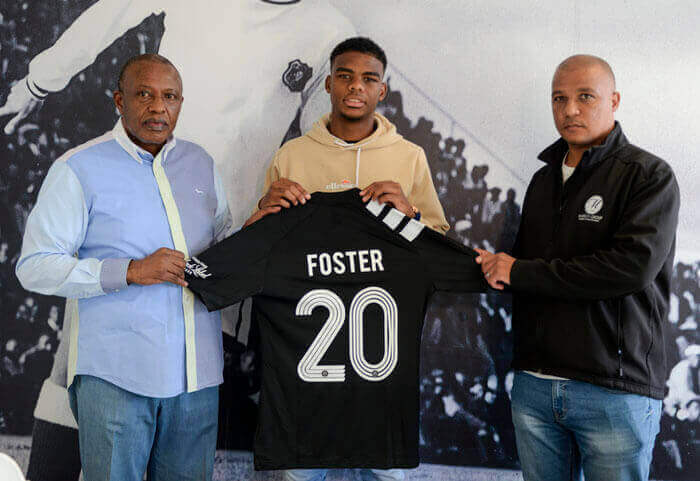 With only three days following his 17th birthday, striker Lyle Foster has been promoted to the Orlando Pirates senior squad. Having impressed in the U17 Gauteng Future Champs, the U18 Engen Knockout Challenge, the U19 Bayhill Cup, and the U23 Project X UK Tour – where he was near the top, if not the premier marksman, on the goalscoring charts – the Bucs youngster has received the call that every player dreams of.

Lyle has been playing in age groups well in advance of his years, having made appearances as a 16-year old in last season’s PSL Reserve League, the Multichoice Diski Challenge. That trend has since continued, more recently with the National U20 side in London, where his Man of the Match performance (including a goal and assist), contributed to Amajita beating England 2-1 in their final tour match.

“This is unreal. To be promoted to the senior team at such a young age is a big honour for me and my family. I’m looking forward to learning from the coaches and growing as a player in my new environment. I want to thank God because this wouldn’t have been possible without him, and I also thank my family and the Club for the guidance and support”, said Foster.

Foster joins Yusuf Maart and Lehlohonolo Mtshali, two graduates from last season’s MDC team, who are also in the senior setup, and Foster acknowledges the role they play in motivating the entire youth roster, something he too hopes to accomplish through his promotion.

“We’ve played with Hloni and Yusuf before, so when they got promoted, it was pretty cool. It showed us that there is always a chance that someone else will follow. They opened the door for guys like me and hopefully I can do the same for the others, you know.”

The Chairman of the Club, Dr Irvin Khoza, expressed his happiness for Lyle and made reference to other great players who donned the famous black jersey.

“Some of the best footballers in that the country has ever produced have donned this jersey. The likes of Chippa Chippa Moloi, Teboho’s father, he was one of the best. That’s why you see his picture on the walls. Together with many names like Jomo Sono and Kaizer Motaung, these players made an impact at this Club and left their mark,” said Dr Khoza.

“At 17 years of age, you join a group of players that includes Jomo, who made history by being among the youngest ever signed by this Club. Congratulations Mr Foster, we look forward to seeing great things from you with this Club.”