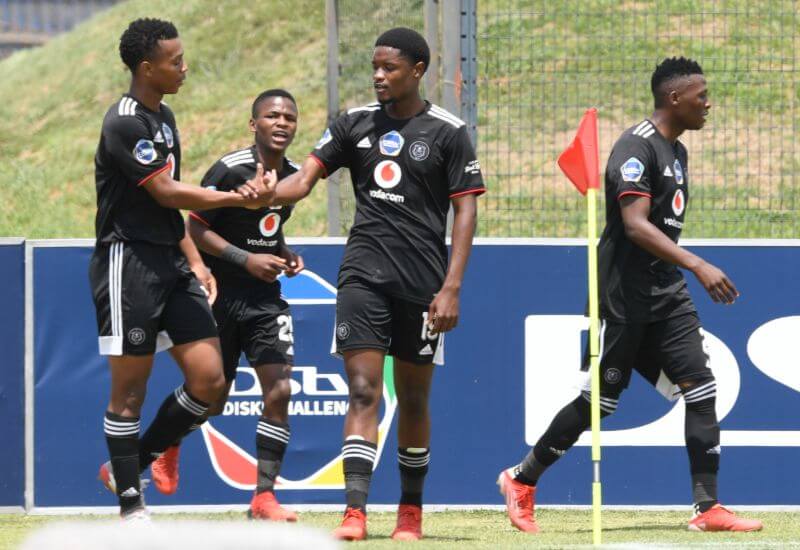 Orlando Pirates Reserves marched to their fifth successive win as they beat Sekhukhune United 3-0 in their DSTV Diski Challenge fixture at Tsakane Stadium on Saturday.

The two sides had met earlier in the season, with the Soweto Giants netting a narrow victory on Matchday 3 of the competition.

As has been the norm in the Bucs Reserves’ last few fixtures, they quickly set up camp in their opponents’ half straight from kick-off, displaying great confidence on the ball.

It took 11 minutes for the first clear-cut opportunity to arrive and fell to the in-form Boitumelo Radiopane, who made no mistake from close range after being located by a defence-splitting pass from well inside Pirates territory by Sonwabo Khumalo.

The hosts could have capitalised from an uncharacteristic error by Kopano Thuntsane just ten minutes later as the Bucs shot-stopper kicked the ball onto the back of an unsuspecting Cassius Spandeel, handing possession over to the opposition. However, the 22-year-old was able to recover well to make a crucial stop.

The middle part of the first half was a relatively quiet affair, with Sekhukhune growing into the game but without making any notable inroads.

A moment of magic from Thuntsane created some daylight on the scoreboard, with the keeper locating a galloping Radiopane, who outpaced the defence to fire in for his second of the afternoon.

It could have been 3-0 just seconds later, as Bucs skipper Thabiso Monyane nearly forced an own goal with a fine cross into the box.

The opening minutes of the second half were characterised by flying tackles from both sides, with players from either camp going into the referee’s book.

A foul in the 55th minute handed Sekhukhune an opportunity to pull one back from a free-kick, but Thuntsane was alert enough to make a save after the ball evaded the wall.

The Bucs Reserves had a set-piece of their own 11 minutes later, but a well-struck shot from Khumalo fizzed just inches over the crossbar.

The home side had their best chance of the afternoon in the 85th minute when Mfanafuthi Mlotshwa shot wide from close range, failing to make full use of a defensive error.

It looked as if Mandla Qhogi’s men were content with running the clock down for a 2-0 victory, until the closing moments when Kamogelo Seemela found Monyane down the right, and the skipper fired into the roof of the net from a tight angle to put his side three-up.

There was not enough time for either side to effect another change to the scoreboard, with Pirates continuing their impressive form in the competition.