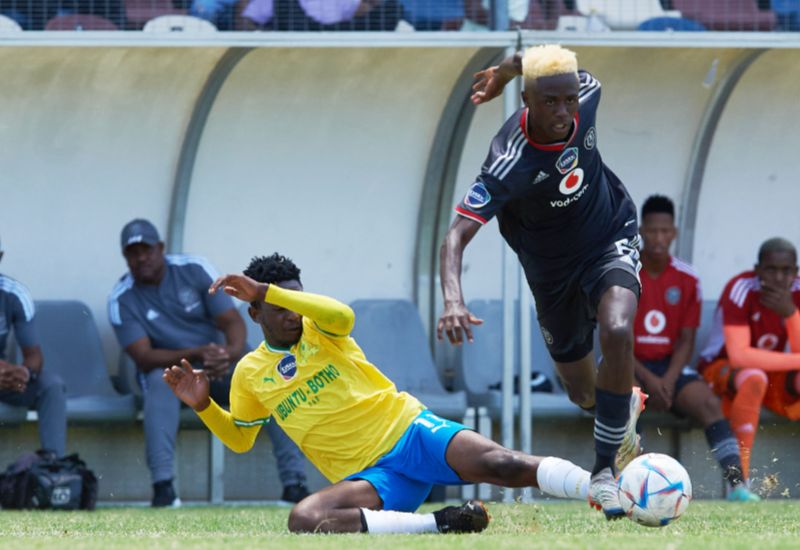 Orlando Pirates Reserves suffered a rare defeat in the DStv Diski Challenge as they went down 4-2 to Mamelodi Sundowns in a thrilling encounter at Giant Stadium on Saturday.

In what turned out to be a contest of contrasting halves, the young  Buccaneers went in looking to close the gap between themselves and the table-topping Cape Town City who had pulled five-points clear at the summit earlier in the day.

The game’s opening exchanges were almost devoid of any excitement, with neither keeper tested as physical confrontations in the middle of the park dominated proceedings early on.

Pirates’ striker Mohau Nkota did however force a save out of the keeper directly from a corner just after the half-hour mark before squandering a golden opportunity on the stroke of halftime when he fired wide from in front of goal.

The second half proved to be a direct contrast to the first, with four goals coming in the first 20 minutes after the restart.

The first came just seconds after the break when the Bucs defence was caught flat-footed, allowing for a clear path to goal as Sundowns took the lead through Jerome Karelse.

The Buccaneers hit back six minutes later through midfielder Njabulo Mndebele, who was in the perfect position down the middle to receive a cross from Relebohile Ratomo and made no mistake in directing the ball into the back of the net.

The two teams continued to trade goals in an exciting passage of play as Thato Matli got on the end of a swift counter to restore the Tshwane Giants’ lead in the 56th minute.

His goal was followed by another strike at the other end, turned in by Nkota who made amends for his glaring miss from the first half when he fired in from just inside the box a minute after the hour mark.

Pirates were made to defend in the closing half hour and were let off the hook a couple of times as Karelse failed to guide the ball into the net on more than one occasion with the defence stretched.

The pressure told in the 74th minute as second-half substitute Sipho Maluleke made his presence felt by restoring Sundowns lead.

Committing men forward as they went looking for another equaliser, the Buccaneers left themselves exposed at the back at times and were made to pay in injury time when the hosts stretched the lead to two goals, putting the result beyond doubt.

Things ended with Sundowns taking a 4-2 win, condemning Pirates to their first defeat since early October.