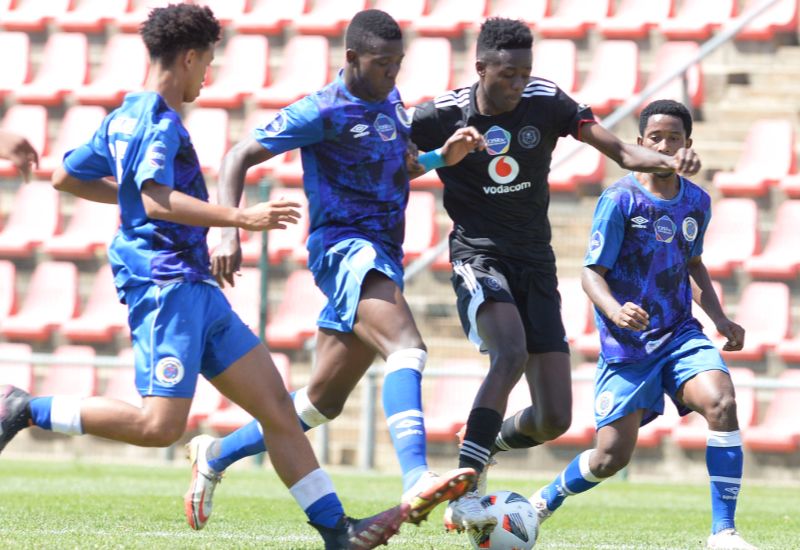 Orlando Pirates Reserves’ charge for the DStv Diski Challenge title suffered another setback when they went down 2-1 to SuperSport United Reserves at Rand Stadium on Saturday.

Fresh off a vital win on the road, the Bucs Reserves sought to claim their second victory on the bounce against a side emerging from a successful last outing of their own.

The hosts however found themselves trailing as early as the second minute after conceding a free-kick deep inside their territory.

Bryn Deely made the most of the opportunity, with his curling shot from a tight angle sneaking inside the far post.

Pirates enjoyed more of the ball as they went in search of the equaliser, but the United goal was heavily guarded by a sea of blue shirts not allowing anything into the final third.

Perseverance paid off in the 23rd minute when Cassius Spandiel leapt high to head in from a corner, bagging his fourth goal of the season.

In trying to restore their lead, the visitors went on a number of counter-attacks, stretching the Bucs defence but without much in the way of opportunities.

A chance came through a period of sustained pressure when Pirates shot-stopper Kopano Thuntsane was forced to make an acrobatic save in the 35th minute to keep out a well-struck shot.

United edged ahead once more one the stroke of half-time, when Tendamudzimu Matodzi found himself in acres of space before blasting past Thuntsane.

It could have been 3-1 three minutes after the second half kick-off when Matodzi sent the ball crashing into the upright after some sloppy defending from the hosts.

The woodwork would continue to play an important part in keeping the score line unchanged, with Bucs skipper Thabiso Monyane denied by the crossbar soon after, following a well-taken free kick.

Monyane would again get an opportunity from a dead-ball situation after the hour-mark, this time opting to find the bottom right corner, but the upright would intervene.

The next opportunity for Pirates fell for Boitumelo Radiopane, who when played in by Spandiel, sent his shot narrowly over the crossbar.

The clock wound down as United made strides into Bucs territory, with Thuntsane making another brilliant stop to keep his side in the game.

However, there wasn’t enough time for the hosts to stage a comeback as they fell to another home defeat.