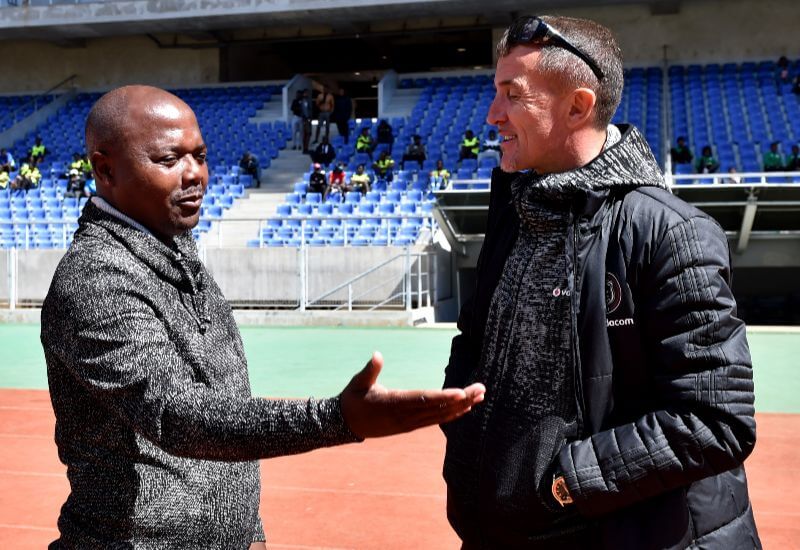 Orlando Pirates play their final friendly match in Zambia today at the Levy Mwanawasa Stadium, taking on Forest Rangers, in a match that highlights yet another Bucs-Zambia connection through former player Perry Mutapa, who will be in the opposition dugout.

Assistant Coach Rhulani Mokwena is cautiously optimistic over the continuously improving performances of the team, and believes that the pre-season camp’s success will only be accurately measured once all its aspects have been properly analysed.

Breaking it down to Orlandopiratesfc.com the tactician highlighted the preparations, which constantly speaking to the ever-evolving game model that the Club is trying to instil in the players.

“There are three parts to understanding the game model. The first would be the analytical presentation where we use a lot of video footage to present the players with their individual responsibilities based on all phases of the game. We strive to theoretically make the players aware of the demands that we have as the Technical Team with regards to their application as individuals and within their positional relationships within the formation.”

“The second part is the practical application in a non-competitive environment that would relate to our training work. Here we visually outline our sessions in relation to the themes and topics that we have set so that the players can see what is expected in training.”

“Finally, we look to see whether or not our teachings can come out in a competitive context and this is why we play these friendly games to try to measure our progress from a tactical perspective. We have been doing a lot of work on our game model with relation to the phases of a game: in possession, how we build up and how we go into the consolidation phase.”

THE MOOD IN CAMP

“So far so good. I think as a Technical Team we can be content, not just with the enthusiasm and the desire to learn that the players are showing, but their coachability and ability to transfer it from a theoretical perspective into practicality. When you watch the game against TP Mazembe, although we suffered in certain parts of the game physically, we dominated possession for the most part and that is key for our game model.”

“When we played Power Dynamos we were in control and extremely dominant in both the first and second match. For us those are signs of the work that we want to do because regardless of the opponent we want to be the dominant force on the pitch. We are a big team and so we have to show that big team personality by imposing our game on the opposition.”

“The players are on a steady incline with regards to their understanding and application of the game model and this bodes well for when we face Forest Rangers in our last match.”

THE ADAPTATION OF THE NEW PLAYERS

“We sometimes underplay the amount of work that was put in last season and when you look at the adaptation with regards to the senior players or the players that played a lot of games last season, you can already see how smooth and fluid their transition is into the game model. They are even starting to add different elements to that game model because they already have the foundation.”

“With the new players that have come in, we had done our profiling of them, because part of establishing the game model means that it will indicate the type of players that you need to recruit. We are fortunate that we work in an organisation where the recruiting department of the club works very closely with the Technical Team regarding the buying of players and this showed in the guys we have brought in currently.”

“Each player was identified based on their ability to suit the game model, and it is clear from what we have seen in the few weeks we’ve had them, that they have the technical and tactical ability to adapt to how we play. We also have great support from the senior players who do a lot of demonstration of some of the concepts that we want to apply, and this has been of great importance and assistance in making it easy to integrate the new players.”

“We are on track with all our preparations and are working towards a plan. There was lots to be done during the off-season, from the medical and psychological profiling, to the physical training camps in Mbombela and Zambia. We have received great support from the management team and it’s now up to us to put that all into competitive practice when the season starts in earnest.”