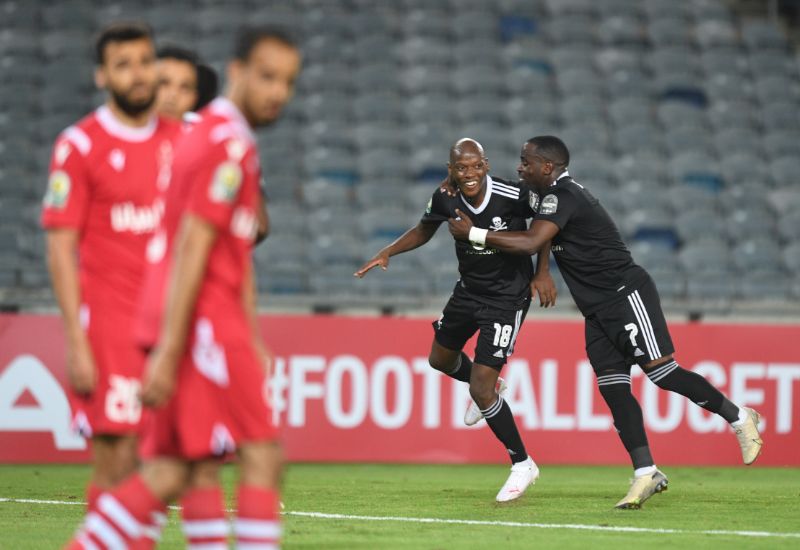 It was one-way traffic at Orlando Stadium on Sunday, as Orlando Pirates thumped Libya's Al Ahli Benghazi 3-0 in a CAF Confederation Cup Group A encounter.

After playing to a goalless stalemate on their visit to North Africa, the Buccaneers came out looking for nothing less than maximum points at home, with group standings looking tight following three rounds of action.

It was, however, the visitors who were the quickest out the blocks displaying great aggression to starve the hosts of possession in the opening ten minutes.

That did not last too long, with the Soweto Giants beginning to surge forward halfway through the first half.

The breakthrough came in the 26th minute, and it was through an unlikely source in centre-back Ntsikelelo Nyauza, who was the recipient of a corner from Deon Hotto. The defender had two bites at the cherry, as his first attempt - a header - fell on his feet, where he swept goalward to make it 1-0.

The Buccaneers continued to control matters, making frequent visits to the opposition's half.

They were rewarded from a corner-kick once more, when Hotto found Tshegofatso Mabasa this time around, and the striker headed into the near-post with help from a deflection on Ahli Benghazi Abubakar Milad, who was credited with the own goal.

Heading into the tunnel two goals clear, Pirates began the second half as they started the first, with Ahli Benghazi enjoying more of the possession.

However, the visitors could not make their brief period of territorial advantage count, despite earning a succession of set-pieces.

Towards the hour-mark, the Buccaneers regained their momentum, spelling more trouble for the North Africans.

The third goal came in the 69th minute after sleek work from Hotto on the left flank, as he skinned the defence before floating in a cross to Tshegofatso Mabasa, who was denied by a fine save from point-blank range. This was before Kabelo Dlamini swooped in to gather the rebound and shoot into the back of the net.

With the introduction of fresh legs, the Buccaneers searched for their fourth of the night and could have found it on the stroke of full-time, when second-half substitute Vincent Pule drew a fine save from the keeper after being played in by Mhango.

Three goals was all Josef Zinnbauer's men could manage, claiming as many points to go top of Group A, with Enyimba and ES Sétif still to play.