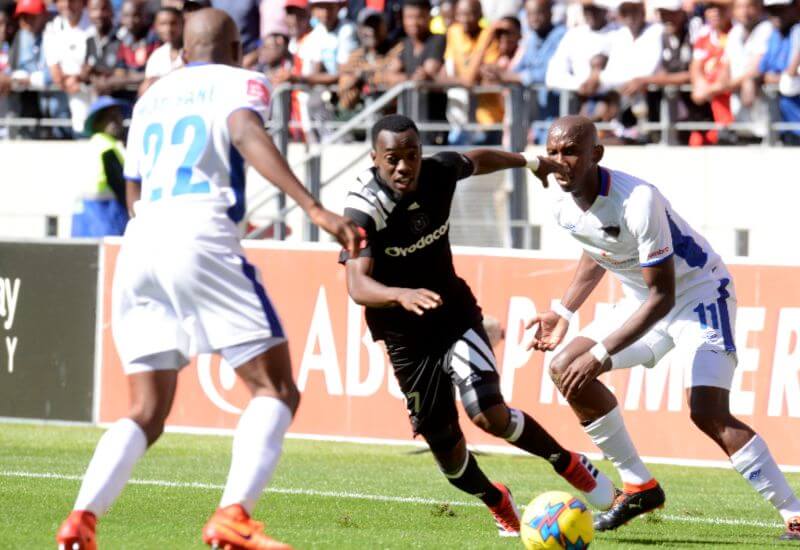 Orlando Pirates came from a goal down to thrash Chippa United 4-2 in an Absa Premiership match played at the Nelson Mandela Bay Stadium on Sunday.

A brace from Justin Shonga as well as goals from Bernard Morrison and Thembinkosi Lorch were enough to see the visitors move to second on the table.

In a weekend when the teams above them dropped crucial points, all eyes were on Nelson Mandela Bay Stadium on Sunday to see if the Mighty Buccaneers could stand up to the task and collect maximum points.

However, when the home side took the lead in the 18th minute from a Mxolisi Macuphu rocket, it looked like the Buccaneers would too drop points. But if that was the case, someone failed to share the script with Micho Sredojevic’s men as they kicked into gear and began to dominate proceedings.

It only took the visitors eight minutes to pull back level after Morrison orchestrated proceedings from outside the box, working his way inside before his attempted cross was handled in the box by Paseka Mako.

The Ghanaian forward stepped up and made no mistake from the spot-kick as he fired past Brighton Mhlongo.

The visitors continued to pile on the pressure but couldn’t break down the United defence. The score was 1-1 at the interval following a lively first-half.

The second stanza started much in the same pace and energy as the first with Pirates continuing to dominate. Bucs launched one attack after another and almost scored the second of the match three minutes after the restart when Morrison’s attempt on the edge of the box went narrowly over the bar.

Morrison was at it again in the 62nd minute when a mistake from Mako played him on goal unfortunately his attempt to chip the onrushing Mhlongo went inches wide.

Pirates deservedly took the lead for the first time in the match in the 73rd minute courtesy of a Shonga strike. The Zambian international displayed a level of composure and skill well above his age to control the ball under pressure with his left foot before firing past Mhlongo with his right.

The lead was short-lived however as the hosts grabbed their much-needed equaliser nine minutes later after striker Katlego Mashego pounced on to a loose ball.

While goals at this time often demoralise teams, the resilience of the Buccaneers’ spirit came to the fore. They never gave up and were duly rewarded for their efforts with a splendid Thembinkosi Lorch header in the 86th minute.

It was 4-2 deep into added time with what will most likely be a leading contender of the Ford Goal of the Month from Shonga, after he fired a shot from an awkward angle which beat Mhlongo hands down.

The referee blew the final whistle shortly afterwards much to the jubilation of the 30 000-strong crowd gathered in attendance.