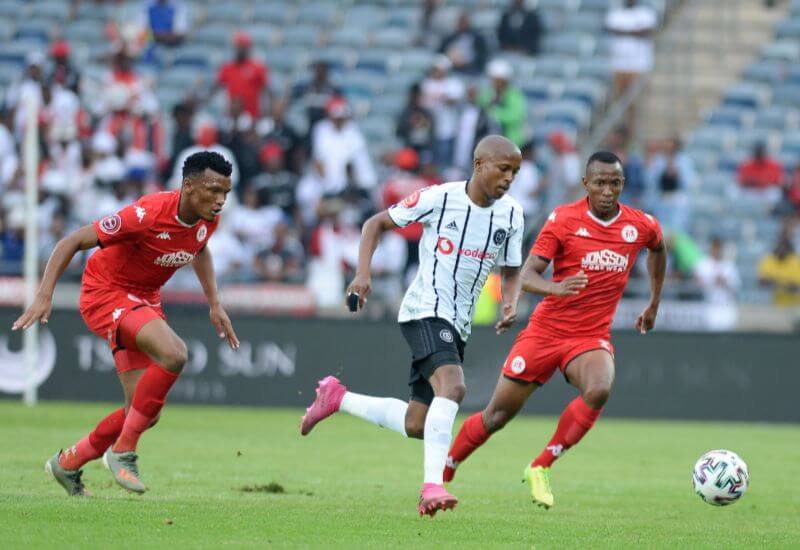 Orlando Stadium was the scene of another maximum-points haul for Orlando Pirates, who were again on the money at home to Highlands Park on Saturday night.

The hosts raced to three first-half goals, before conceding late in the second stanza for a 3-1 victory, which cemented their spot in fifth place in the current league standings.

Only six minutes elapsed before they got themselves on the board, with Thembinkosi Lorch getting off the mark after covering a lot of ground undetected by the hosts’ defence, catching the ball on the volley to turn it into the net.

A rampant start to the half continued as Pirates’ in-form goal-poacher Gabadinho Mhango pounced on an ill-advised back-pass to round the keeper for his side’s second just four minutes later.

There was real concern for the Buccaneers later in the first half, with goalkeeper Wayne Sandilands coming off second best from a collision, which resulted in a lengthy stoppage with the shot-stopper receiving some treatment.

However, the veteran player was soon back on his feet - albeit sporting a shiner - to resume his duties between the posts.

He was in the thick of things soon after, intervening as Lindokuhle Mbatha was afforded a clean header that would have halved Highlands’ deficit.

Four minutes before the break, Highlands got close through the prolific Peter Shalulile, whose long-range effort went just inches wide, with Sandilands rooted to the spot.

While two goals looked a healthy advantage going into the break, Paseka Mako had other ideas as he unleashed a long-range shot from the edge of the box to put Pirates three ahead.

The Bucs were 3-0 at halftime, and it could have been four had Fortune Makaringe’s header, within a minute of the restart, was spectacularly kept out by Kyle Peters.

Forays into the opposition half were the order of the day throughout the second half, with Sandilands proving resilient on the Pirates end.

It would take until the final ten minutes for his defence to be breached when Mlungisi Mbunjana collected the ball from the middle of the park before trying his luck from out wide for what would turn out to be a consolation goal.

Moments later, the league’s top goal-scorer, Mhango would have been instrumental in restoring the hosts’ three-goal advantage, as he set up Luvuyo Memela, who did everything right, besides pulling his short to the right side of the post for Pirates’ fourth.

The closing stages would provide no further goals, despite the visitors’ probing, as the Buccaneers held on for their third win in a row, a fourth under Josef Zinnbauer.