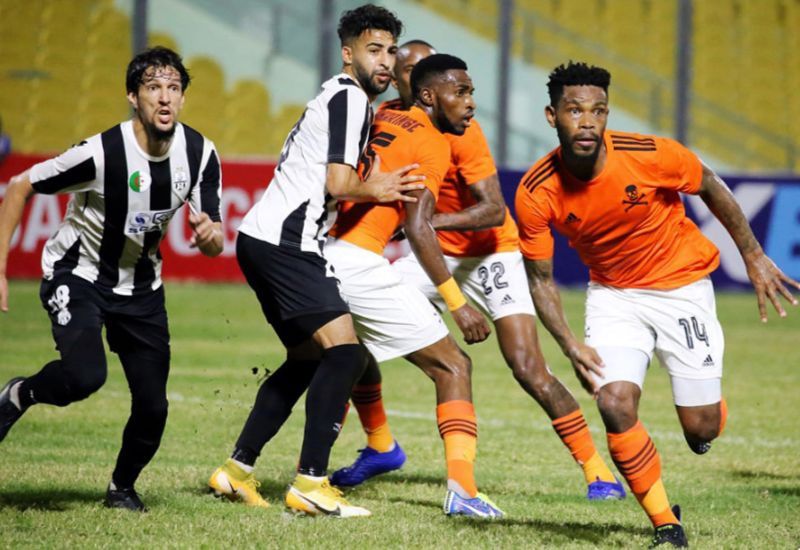 The fixture was a historic first-ever meeting between two sides, who are among the favourites to progress past a tough Group A.

It was the hosts who began the brighter of the two sides, falling just inches away from an early opener.

The Algerians were denied by Siphesihle Ndlovu, who was at the right time at the right place to keep out a goal-bound effort after Richard Ofori had come out of his line.

The Buccaneers suffered a huge blow inside the first 15 minutes when the Ghanaian shot-stopper was stretchered off after pulling a muscle while taking a goal-kick. The equally-capable Siyabonga Mpontshane was brought on as a replacement in his place.

As the clock ticked on, confidence from the Pirates seemed to grow by the minute, as they managed to find some go-forward ball.

They continued to camp inside the Black Eagles' half, but with minimal chances at goal.

One of the rare opportunities to put the visitors in front fell to skipper Happy Jele, who was unmarked when he met a cross from Deon Hotto, but could not direct his header into the target.

Vincent Pule could have made the breakthrough in the dying moments of the half when he turned well inside the box, but could only shoot wide amid close attention from the defence.

There was a bit more purpose from both sides in the second half, with chances falling to Pule and Fortune Makaringe, who both could not find the target.

At the other end, the hosts introduced 20-year-old Mohammed Amoure, who added some spark to their attack.

Towards the final whistle, the Buccaneers were awarded a succession of free-kicks, both won by Pule at the edge of the box.

The birthday boy stepped up to take the first one, but there was neither enough curl nor dip in his shot to take it close to the target.

He was again at the end of the second set-piece, this time attempting to head in from a delivery from Thabang Monare, again not finding the net.

That was the last action of the contest, as both sides could only return with a point apiece from their Ghana voyage.