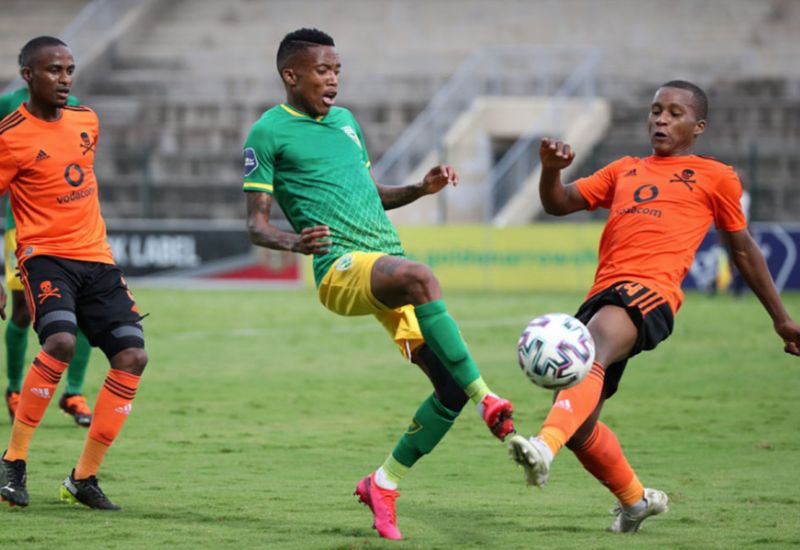 Orlando Pirates were stunned by Golden Arrows, who claimed a 2-0 victory at Sugar Ray Xulu Stadium on Tuesday night.

The encounter was the second meeting between these two sides in the space of 14 days, following their goalless draw at Orlando Stadium earlier in the year.

The first half was subdued for the most part, with minimal chances in front of goal at either end.

It was the hosts who had the best of the few opportunities in the opening exchanges, as Knox Mutizwa curled in what looked like a goal bound effort, only for Bucs goalkeeper Richard Ofori to deny him with a brilliant save, diving low to his left to keep out the danger.

A controversial moment five minutes from the break resulted in the breakthrough, as Arrows took a quick throw-in with another ball still in play. In the move, Pule Mmodi snuck behind the Pirates defence before finishing low past Ofori.

Searching for the equaliser, Pirates had their best chance of the half when they were awarded a free-kick inches away from the Arrows box.

Hotto took the set-piece, and almost drawing his side level with a dipping shot, which was only just kept out by Arrows keeper, Sifiso Mlungwana.

An even better opportunity fell the Buccaneers' way right on the hour mark when they were awarded a penalty for a handball inside the box.

Thembinkosi Lorch stepped up, but put way too much into his shot, sending it well over the bar.

Pirates were made to rue that missed chance almost immediately when Mmodi completed his brace from a counter-attack, which he finished by placing the ball out of reach for a diving Ofori, who could only land fingertips on the ball on its way to the back of the net.

This meant an uphill climb for the visitors, who pushed men forward in an effort to make a dent on the deficit.

Despite enjoying most of the possession, as well as territorial advantage, the Buccaneers could not penetrate a determined Arrows defence. The final whistle was eventually blown with the hosts claiming their first win over the Soweto Giants in over three years.