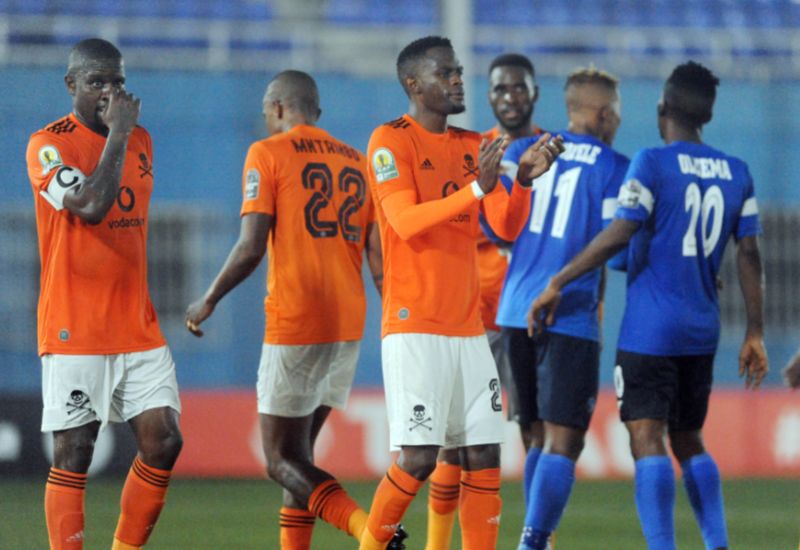 Orlando Pirates have qualified for the next round of the CAF Confederation Cup, despite a 1-0 defeat to Enyimba FC at Enyimba International Stadium in Aba, Nigeria on Wednesday night.

With one foot in the knockout stages, the Buccaneers needed to avoid defeat in Aba, while anything less than a straight victory would have meant an early exit for the hosts.

However, the visitors were the first to signal their intentions with Vincent Pule drawing a save from keeper John Noble in the third minute.

The Bucs midfield maestro came close to finding the breakthrough again in the 13th minute when his shot from a free-kick crashed into the crossbar, landing in the path of Innocent Maela, who misdirected his header.

From the half-hour mark, most of the activity moved to the other end of the field, where Bucs keeper Wayne Sandilands was called upon to make a few saves.

The veteran shot-stopper was first called upon to keep out a ball that was intended as a cross before drifting towards goal, drawing an acrobatic save from the 37-year-old.

He was again in top-form, as he had to contend with an awkward bounce from a long-range shot.

Desperately seeking victory, the hosts remained dominant on attack in the second half, camping out in Bucs territory.

However, the wall of orange shirts made life difficult for The People's Elephant, who launched attack after attack in the Buccaneers box.

With time running out, Enyimba thought they had pulled in front when the ball landed in the back of the net, only for their celebrations to be cut short by the offside flag.

The breakthrough however came five minutes into stoppage time, when Cyril Olisema poked one in from close range.

It was enough to hand Pirates their first defeat of the competition, while they had done enough in Group A to secure a spot in the last eight alongside Enyimba.