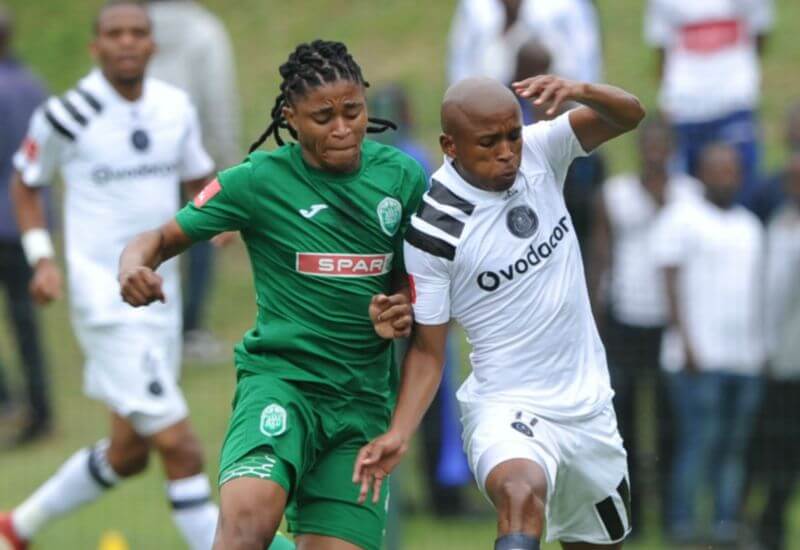 Orlando Pirates came from behind to claim three vital points following their 2-1 victory over Amazulu at the King Zwelithini Stadium on Sunday afternoon.

With Mamelodi Sundowns leading the Absa Premiership log table by six points following their 2-0 win over Bidvest Wits, the Buccaneers came into this encounter knowing that anything less than a victory would not be enough.

The visitors were unsettled as early as the 10th minute when veteran striker Mabuthi Khenyeza netted the opener much to the surprise of the Pirates-strong crowd on the day.

As the game progressed it became clear that Usuthu’s gameplan was to catch the high-flying Buccaneers on the counter attack. They almost made it 2-0 in the 23rd minute when in another move via the transition, another veteran and former Bucs striker Siyabonga Nomvethe combined well with Khenyeza to set up an unmarked Butholezwe Ncube in the box, only for the midfielder to strike the side netting with only the keeper to beat.

Not to be outdone by their 86-year old counterparts, the 81-year old Buccaneers kicked into gear as they began probing up front with much more purpose and direction.

A swift breakaway in the 30th minute from Pirates saw Thembinkosi Lorch released on goal only for the Bucs man to be brought down on the edge of the box by the onrushing Usuthu keeper. Pirates netted the equaliser from the resultant set piece, with Musa Nyatama heading in a pin-point cross by Luvuyo Memela.

The visitors almost regained their lead in the 37th minute through another counter attack move. Man of the Match Siyethemba Mnguni entered the box following a through pass from Khenyeza, however the midfielder lost his footing in an attempt to turn the Bucs defence and the threat was duly defused by the Buccaneers rear guard.

The teams went into the break with the score tied at 1-all.

Usuthu came out the blocks hot again at the start of the second stanza with Khenyeza proving to be a thorn in the Bucs defence once again when he almost found his second in the 57th minute. Ovidy Karuru delivered a threatening low cross into the box but this time the 35-year old was unable to make clean contact with his strike which allowed defender Gladwin Shitolo to clear the ball from danger.

The momentum of the match changed in favour of the Bucccaneers and on 74 minutes the Usuthu keeper pulled off a superb save, diving low to his right to keep out a low shot from Justin Shonga.

Pirates’ persistence finally paid off when they found their second of the match with ten minutes left on the clock. A cross from the left from Innocent Maela was missed by his teammates in the middle, but substitute Thabo Qalinge arrived late to meet the ball and strike a low shot into the back of the net.

The visitors were forced to be on full alert as Usuthu pressed forward in search of their equaliser but fortunately the team was able to hold off and secure the all-important three points.

With this victory, Pirates maintain their seven point lead over third and fourth placed Maritzburg United and Kaizer Chiefs who both won their respective matches. Pirates’ next match is against Bidvest Wits on the 25th April.