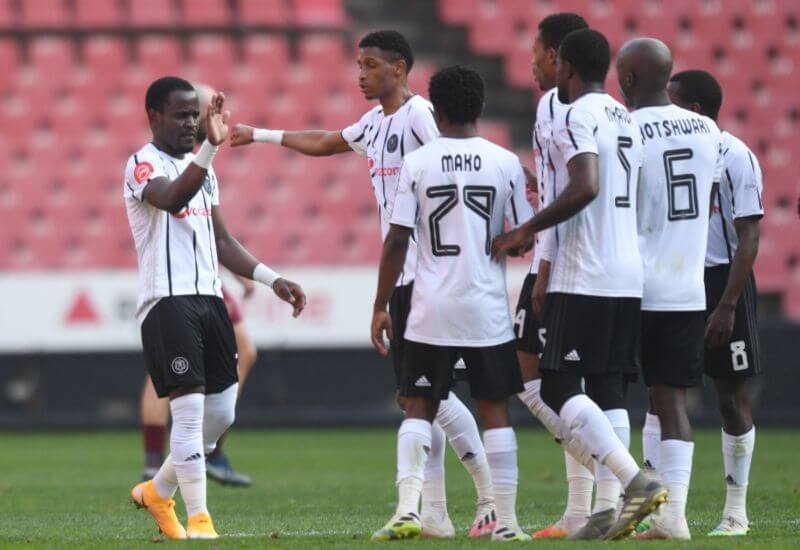 Orlando Pirates secured a hard fought 1-0 victory over Stellenbosch FC courtesy of a Gabadinho Mhango strike, in what was the final Absa Premiership match of the 2019/20 season.

With this victory, the Mighty Buccaneers end the campaign in third place and with that, they qualify for the CAF Confederations Cup.

The hosts came into the match looking to make it three wins on the trot however, the visitors were not ready to go away without a fight. The Buccaneers found themselves scrambling early on to divert the danger after a miscommunication at the back allowed Ashley du Preez to pounce on a Ben Motshwari back pass that was not gathered by its intended recipient.

The Stellies winger found Leletu Skelem inside the box, but Bucs' defence managed to clear away the threat much to the relief of Motshwari.

Pirates' attack took some time to get warmed up, but soon looked to be kicking into fifth gear as the clock approached the 20-minute mark, with Mhango asking questions of goalkeeper Lee Langeveldt after neat interplay between Vincent Pule and Thembinkosi Lorch.

The reigning PSL Player of the Season, along with Kabelo Dlamini, each had chances at goal, but it would take until the dying moments of the first half for the breakthrough to arrive.

It came through Mhango, who made it 16 goals for the season after initiating an attack down the left flank, before arriving in the box in time to drive home the advantage.

The second half could have begun with the Soweto Giants doubling their lead when Lorch was clear on goal, but his shot ballooned over the crossbar.

This was just after a free-kick was whipped into the box, prompting Ben Motshwari to head into the direction of the Bucs goal, where Wayne Sandilands was well alert.

Mhango's goal, which clinched him the Lesley Manyathela Golden Boot, proved to be enough for the Buccaneers to earn a return to African club competition for a third straight time.