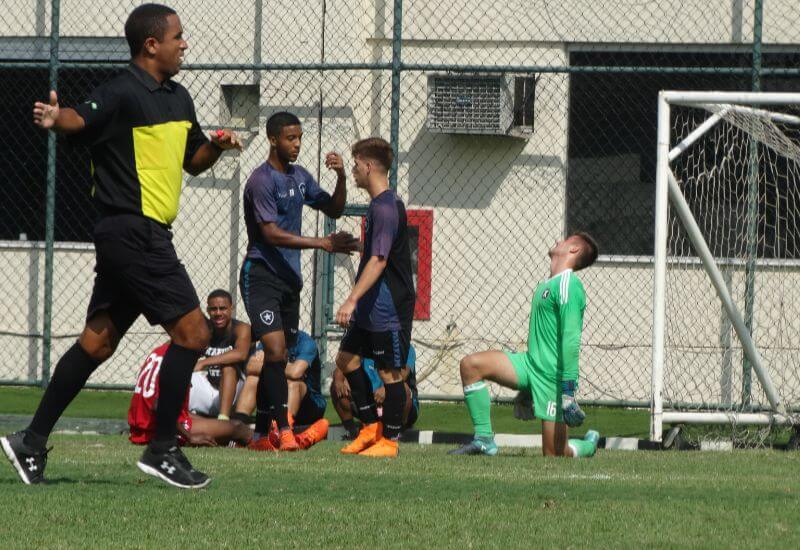 The Project X tour is all about learning experiences, both on and off the field. And in every experience there is a valuable lesson which needs to be heeded. On Monday morning, Botafogo taught the PJX a valuable lesson in EFFICIENCY at the General Severiano base. With all the quality of chances in front of goal, it came down to the ability to convert those chances, which was the undoing of ‘Os Touristas’, as their hosts romped to a 5-2 win.

With three games undefeated, the PJX squad took a short trip across the city to the home base of Botafogo FR, to take on the fourth of five opponents on the Rio tour.

The tour has seen many comparisons between Orlando Pirates and the home sides, and the parallels in this fixture couldn’t have been more glaring despite the 33 years and 7095 km between them: both sides wear black and white; both sides are adorned by a star in their insignia; both sides play a key role within the community and in the hearts of the millions of people that support them.

PJX started quickly, keeping the Fogão on the backfoot for the better part of the opening 10 minutes. Phumulani ‘Bhola’ Masinga with his first start of the tour was central to all the attacking moves, as ‘Os Touristas’ looked to channel all attacks through the midfielder. With great support from ‘Pepe’ Sesane, the duo kept the PJX engine ticking as they knocked on the Botafogo door.

With all the exerted pressure by PJX, the lack of finishing in the final third would come back to haunt them when Fogo pounced on their opportunity and opened the scoring after an unnecessary foul. The defence was caught flat when they drifted with the attacking line, not spotting a late run by the Botafogo centre back Souza, who headed home beyond Alexi Apollonatos in goal.

Things went from bad to worse just two minutes later when Fezile Gcaba was caught high out of position and left a gap in defence for the BFR midfield to run through the channel. Sizwe Jaca did well to get back to cover, but could do nothing to hold back striker Marcelo, who’s shot deflected off Jaca on it’s way into goal for 2-0.

PJX chased the game, playing a very high line and were soon punished once again. Throwing themselves uncharacteristically into every challenge, the Fogão midfield picked their moment before releasing Marcos for the shot from outside the box and into the bottom corner.

The water break seemed to get the PJX back into the groove, as they pushed for a way back into the game, with Zakhele Lepasa and Bonga Maphumulo coming close on separate occasions. Two quick changes saw Augustine Mahlonoko and Lethabo Mazibuko joined proceedings, and immediately the PJX machinery began to click into gear. A better finish to the half which saw PJX lose themselves in an eight minute period to concede three times going into the half time break.

The second half was an open affair with both sides looking to wear the other down. The teams came out firing and came close to scoring on many occasions. The second half deadlock would be broken by Riyaaz Nell in the 62nd minute when he got onto a through ball and tapped beyond the keeper, after a handful of chances. Lepasa was soon into action as well, getting onto the end of a Smiso Bophela cross, but was denied by the crossbar as the ball came back off the underside and bounced on the line before being cleared.

The PJX would have been three goals to the good, were it not for some excellent work between the sticks by Juan. The young Botafogo keeper pulled off a myriad of saves to deny the relentless attack led by Lepasa, ‘Bhola’ and Mahlonoko. Botafogo kept their patience in the face of a sustained attack and picked their moments to put PJX to the sword, capitalising on the gaps left behind by the desperate attack to make it 4-1.

PJX defence let themselves down once again with just over 10 minutes to go, as they fell asleep while Botafogo sneaked down the right flank, drawing them out of position and punishing the exposed centre. Marcos had an easy finish to make it 5-1, before Lepasa joined his strike partner Nell in getting onto the scoresheet, after Nell’s shot was parried by the excellent Juan into the path of the unmarked striker.

Botafogo de Futebol e Regatas, commonly known as A Estrela Solitária (The Lone Star), competes in a number of different sports incuding volleyball, rowing and swimming, but they are mostly known for their football.

The team's home ground is the Estádio Olímpico Nilton Santos, named in honuor of Nilton Santos, a former club player and two time World Cup winner who is widely regarded as the greatest left back of all time. Their football pedigree doesn’t just stop there. They also have two winners of the World Cup Golden Ball Award. Legendary midfielder Waldyr Perreira “Didi”, himself a two-time World Cup winner took the prize in 1958; while Manuel Francisco dos Santos “Garrincha”, one of the best dribblers of all time, took the accolade in 1962.

The other accolades of the club include:

They are the current 2018 Campeonato Carioca champions.