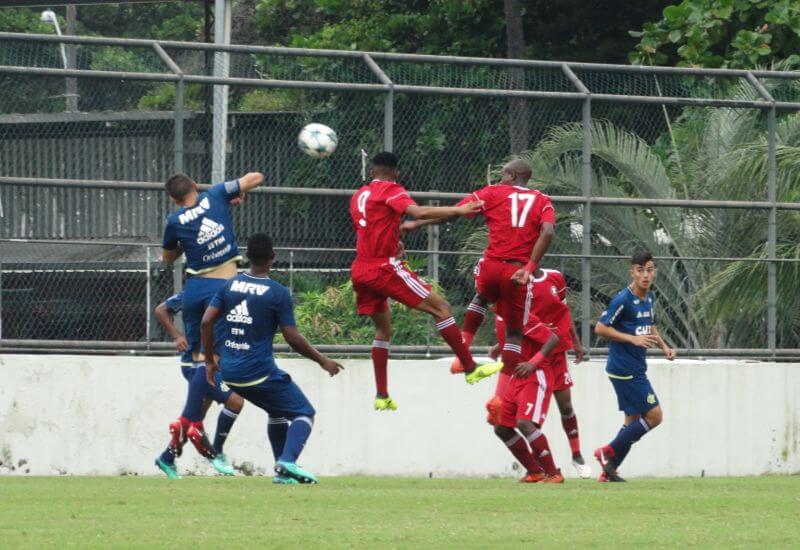 The Workers’ Day holiday is synonymous with taking a break and slowing things down, as the country

year. For Project X, there was no respite as the touring side continued with preparation ahead of one of

their biggest fixtures since the program’s inception.

Three years of Project X were set on a collision course with 122 years of Rubro-Negro, when the visitors

took on the Scarlet & Black of CR Flamengo. In what was a complete contrast of styles, history and

ability compared to their first opponents, the PJX needed to have their wits about them when they took

on a side that is widely regarded as the most beloved in Brazil.

An additional feature of the preparation was the visit to Ninho do Urubu, the club’s training base.

Nestled deep within the leafy and mountainous neighbourhood of Vargem-Grande in Rio, the Rio giants

opened their doors and showed great hospitality in allowing the visitors to train at their base.

Flamengo started quickly out the box, dominating the possession with swift and purposeful passing

between the PJX lines. A physically imposing opponent, the Rubro-Negro pushed their way around their

home turf, with PJX trying desperately to keep shape and hold their lines. It wasn’t long before they

PJX needed to respond and started to keep their foot on the ball, a more patient possession-based

down the right and he headed ominously toward goal. The PJX man did well to fire a low cross to the far

post for Smiso Bophela to equalise from close range at the end of a deep run down the left. 1-1.

Spirits were certainly lifted by that equaliser and the visitors began to assert themselves on the game. It

was however undone when Samuel Nkomo committed a foul an uncharacteristic foul in the box,

lunging at his man from behind and leaving the referee with no choice but to point to the spot.

palm on its way into the bottom corner. 2-1 going into half time.

and their own brand of physicality against a larger opponent. Mahlonoko, showing class and ability

beyond his years fired the PJX back into the game shortly after the hour mark, getting onto the end of a

Lepasa pass and tucking into the bottom corner. A well-deserved goal for a player who has been

amongst the standout performers on tour so far. Together with Thabiso “Pepe” Sesane, the two

youngsters have been the archetypal Davids, taking on a Brazilian Goliath.

Flamengo weren’t rattled by the equaliser and made PJX pay immediately. Winning a throw in the final

third, the Rio giants somehow managed to get through a 4v9 situation, exposing a gap in the PJX

defence to cut through the middle and fire past an exposed Thuntsane for 3-2.

As the game wore on, PJX continued to probe and they would reap the reward when Thuntsane spotted

a high line by the Flamengo defence and fired a long ball through the middle. Riyaaz Nell timed his run

to perfection, as he came around the defence to control the bouncing ball and bag the equaliser with

only minutes left to spare.

You cannot mention the world’s biggest football clubs without counting Flamengo amongst them.

The support is born from the success of the club over the last century.

Established in 1895, Flamengo is one of the most successful clubs in Brazilian football. Their accolades