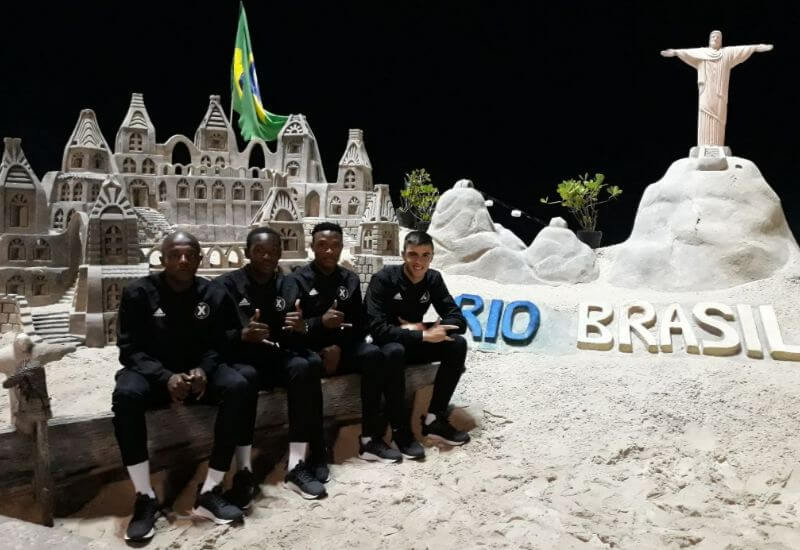 The Project X Tour is officially underway following the series of connection flights from Johannesburg to Rio de Janeiro, Brazil. With the team finally settled down just a stone’s throw away from the famed Copacabana Beach, the boys took an easy afternoon acclimatising to the conditions, before an early supper and evening preparation for the training that commenced on Sunday, 29 April 2018.

With the first match of the tour being scheduled for Monday afternoon against Clube Atlético da Barra da Tijuca (CABT), the Project X squad was put through their paces in the unforgiving Rio heat by coaches Mxolisi Mngomezulu and Mandla Qhogi, at the squad’s adopted base in Rio, the Zico Centro de Futebol.

While Rio is widely known as the most popular destination in Brazil, and arguably South America as a whole, The Project X side has continued with their training regime which includes tactical sessions, video analysis, as well as training corrections from their recorded training sessions. The aim of the tour – while educational from the perspective of new cultures and football opponents – it also exposes the young players to the rigours of being a modern professional footballer.

After a packed day of training and match preparation, the Project X side took to the beach for a walk after dinner to continue to take in the sights and sounds of a vibrant city that promises a great football and life lesson as the journey continues over the next two weeks.

Affectionately known as Tricolor da Zona Oeste, CABT is club formed in 2010 and currently plies it’s trade in the Campeonato Carioca Serie B1.

The club originally wore blue and white, but now dons the famous colours of another Project X opponent, Fluminense, out of homage to their deceased former Vice President Ézio Leal Moraes Filho – who is a Fluminense legend.

CABT are previous winners of the Torneio Capital, a tournament in Rio that is held as an extension to the Serie B of the Carioca Championship, managed by the Football Federation of the State of Rio (FERJ).