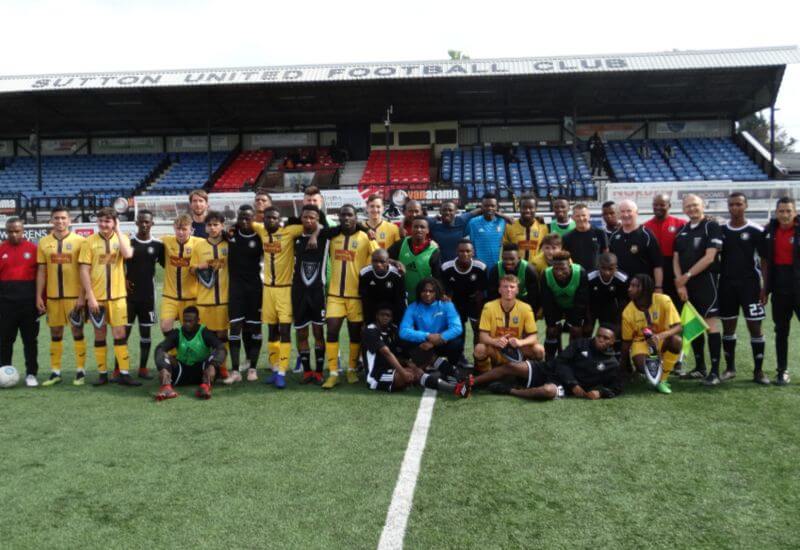 With two days of training and cold weather under the belt, the Project X tour kicked off it’s first match with a resounding 4-1 victory over Sutton United at Gander Green Lane.

In what has become the traditional opener to the UK Tour, the match with Sutton started at a reasonably high pace with the visitors looking to be the early aggressors. The first chance of the game fell to Katlego Cwinyane who was sent through on goal by a lovely ball from his captain Saketso Moremi, but the striker dragged his effort wide of Christian Mbeta in the Sutton goal.

Kgotlelelo Motupa, who came on early to replace the injured Kagiso Madisha was next in line with the chance as a sweeping move by “The Tourists” found him free inside the box, but his ambitious shot with the outside of the right foot went wide of target.

The pressure would soon take its toll and PJX would pounce to break the deadlock in the 26th minute. Lethabo Mazibuko would be first on the scoresheet as he got on the end of a well worked move on the edge of the box. The full back would cut inside from the right, and onto his favoured left foot before smashing a powerful effort into the top corner for 1-0.

Cwinyane would extend the lead in the 38th minute, breaking the high defensive line with a powerful run to put himself one-on-one with Mbeta. The keeper came out early but ‘Kuruman’ as he is affectionately known, was alert to the danger and poked beyond him into the empty net.

United began to get their foot on the ball and look to dictate the tempo after going two goals down, with Kyle Henry being the main outlet for their attack. His dangerous runs down the flank kept Bonga Maphumulo and Thabiso Sesane honest in defence, with the speedy winger reaching into his bag of tricks to pry open the resolute rearguard.

With the game approaching half time, it would be PJX’s turn to turn on the speed as Smiso Bophela made light work of Callum Coen’s intentions, beating him on the outside before cutting back to the unmarked Maphumulo who tapped wide of the open net when it was easier to score.

His blushes would soon be spared however as Olwethu Madolo made it 3-0 on the stroke of half time in what looked like a repeat of the Cwinyane goal. The ball from midfield came through the defensive line and this time Madolo broke quickest to tap beyond the onrushing keeper.

The second half started much like the first had ended, with PJX making the early running. Cwinyane would bag his brace in the 48th minute after some good work by Motupa to free himself of his marker before creating a three-on-three attack situation with Bophela and Cwinyane. With all three attackers in good space, Motupa picked out Cwinyane who smashed the fourth into the roof of the net from a tight angle.

The Tourists would continue to keep a stranglehold on the game and make changes to the lineup, with the introduction of fresh legs in the form of the energetic Azola Tshobeni amongst others. The youngster lived up to the mantra of dynamite coming in small packages, and it would be his energy and link-up play that would see PJX continue to dominate the ball as Sutton were kept on the backfoot. Claudio Cireasa would stand tall in the heart of the Sutton defence, coming to his side’s aid on numerous occasions as they repelled wave after wave of attack.

Sutton would pull one back after Kai Whitmore found the back of the net following a scramble in the box which wasn’t cleared by the defence. Sibusiso Ngwenya, who had a relatively quiet afternoon in goal went down low to his right but couldn’t keep the effort out.

Cireasa found a new lease on life following Sutton’s goal and he too began bombing forward from deep, sending a searching ball behind the defence to Matt Kerbey, whose intentions were foiled by the backtracking Motupa.

Sutton continued to work hard going into the closing stages of the match, with Alex Nunes and Kiyo Brown fighting the good fight, but it would be the visitors who would see home the result as the referee blew time on proceedings for a 4-1 victory.