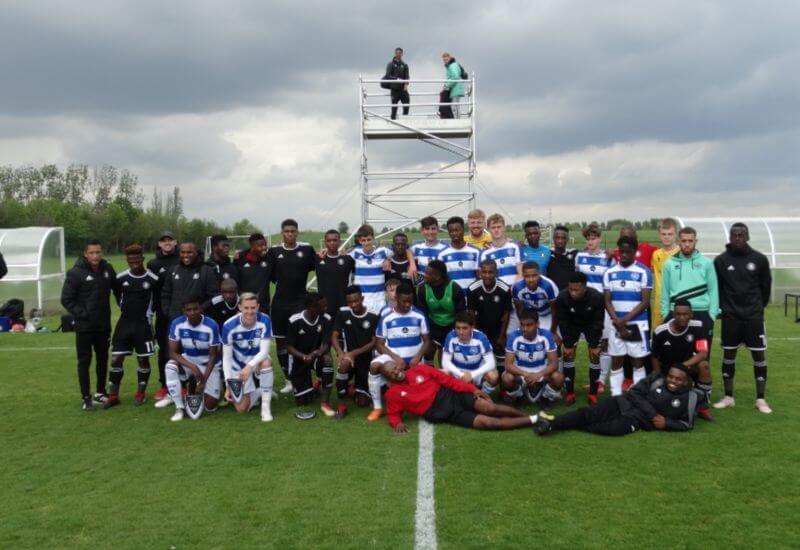 The Project X team maintained their unbeaten run against Queens Park Rangers this afternoon, as they saw out a spirited 2-2 draw at the Rangers training base in Harlington. With a change in formation and the inclusion of Katlego Ramonyai as part of a back three, the visitors looked to employ a different approach going into what was billed to be a tougher and faster opponent than before.

There is history between these two sides dating back to 2016 when the first Project X team toured London. The opening fixture of what has since become an annual event saw the visitors triumph with a 4-1 victory. The winning run continued into 2017 with a 2-1 win and with the 2019 edition of the fixture, there was plenty at stake for both sides.

In a much more physical encounter than in previous years, the visitors were up against it from the beginning. QPR’s high intensity approach had the Project X side on the backfoot, and it would count after just two minutes when the R’s went ahead with a powerful shot into the bottom right hand corner.

Captain on the day, Bongani Mabena, was knocked from behind and the referee allowed play to continue. Rangers capitalized on the possession and finished cleanly from inside the box. The visitors were up in arms but the protests feel on deaf ears as the play moved back to the centre line for the restart.

In what was to be a lesson quickly learned, PJX began to anticipate the physicality and turn on their own aggression which allowed them to compete better in the middle of the park. They began to play with more freedom and soon fashioned their own series of chances.

It would be in the 13th minute when the first real chance fell to the visitors when Lethabo Mazibuko’s well taken corner was met by Caio Marcelo at the near post. The Brazilian timed his run to perfection and his contact with the header was pure, but the effort went agonizingly wide of the target.

Moments later it would be Katlego Cwinyane’s turn to get on the front foot as he broke the defensive line before rounding the keeper and heading towards goal. His attempt was short-lived however as the assistant flagged him down for offside.

Project X began to assert themselves on the game, with Mabena playing the quarterback role and dictating terms in midfield. His eye for the pass and keen positional sense gave the visitors that extra pocket of space to allow the speedy attackers to move forward and put pressure on the defence.

The pressure would lead to a free kick which hit the target after Saketso Moremi’s bullet asked questions of the keeper, who went down low to his left to make the block and gather the ball at the second attempt.

Both sides went into the break with the visitors trailing 0-1.

The second half saw the same assertive performance by PJX as they fashioned three quick chances in the opening passages of play after the restart. A sweeping movement through the middle saw the PJX creating overloads down the right, and full back Bonga Maphumulo found himself open in the box for the second game in a row, but failed to convert the easy chance to get onto the scoresheet.

Arguably the best move of the game came from the midfield trio of Mabena, Moremi and Olwethu Madolo, who knocked the ball around in triangles and at pace as they edged forward in attack. It was a clinical display of one touch passing and control which allowed Cwinyane to get into the box at the end of the move, but the keeper’s trailing leg denied ‘Kuruman’ the opportunity to put the icing on what would have been a tasty piece of well baked cake.

With an hour played, Mabena would fire the visitors back into the game after winning back possession and forcing his way forward through traffic with some delicate touches before unleashing a venomous strike which beat the keeper.

The goal seemed to put a spring in the step of the visitors as they squeezed the R’s and looked to force mistakes. Marcelo, who was having an imperious afternoon at the back unlocked the defence with another of his trademark pinpoint accurate passes. Madolo was coming from an offside position but did well to leave the ball as Cwinyane made the run from deep. The hands went up from the QPR defence and the referee waved them away as Kuruman tapped beyond the onrushing keeper for a 2-1 PJX lead.

There was chance after chance after chance that the visitors created but none found the back of the net, where it some cases it was easier to score than to miss the opportunity. They would eventually rue the missed chances when in the 73rd minute the referee pointed to the spot after Marcelo was adjudged to have brought down his man, in a seemingly innocuous challenge.

Sibusiso Ngwenya went the wrong way as the home side brought the game back to 2-2 from the penalty spot.

With fresh legs being introduced and PJX continuing to press the home side, Boitumelo Radiopane would be the next to find the back of the net with his run and finish, but much to the dismay of the visitors, the goal was chalked off for offside in the dying moments of the game.

The referee blew time on proceedings and the visitors left the game feeling that an opportunity for a third win over QPR had eluded them, despite the many lessons learnt from this encounter.