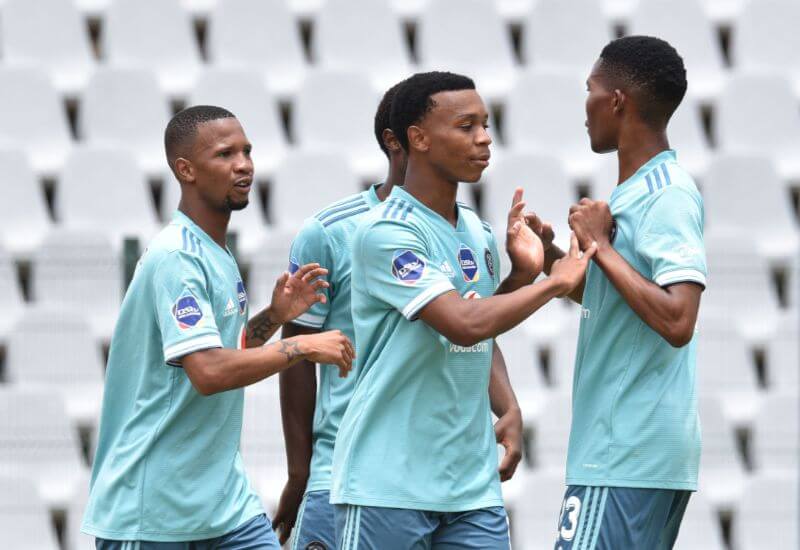 Four goals from Boitumelo Radiopane handed Orlando Pirates Reserves a 5-1 victory in their Soweto Derby encounter against Swallows at Dobsonville Stadium on Saturday.

The young Buccaneers looked to consolidate their spot at the top of the DSTV Diski Challenge standings, having won their last seven games to sit three-points clear of second-placed Stellenbosch FC.

Coach Mandla Qhogi rang in the changes, the most notable change being up front where the influential Mohau Nkota was replaced by Katlego Cwinyane, who paired up with Boitumelo Radiopane.

The Bucs Reserves’ front duo could have combined to provide the opener inside the first three minutes when Radiopane’s cross into the box evaded Cwinyane.

However, the wait for the first goal of the encounter wasn’t long, with the referee spotting a handball inside the box and awarding a penalty to the visitors in the fifth minute.

Radiopane stepped up, and made no mistake from the spot as he calmly sent the keeper the wrong way, grabbing his eighth goal of the season.

The hosts could have hit back five minutes later when they were awarded a free-kick in a threatening area, but Bucs shot-stopper Kopano Thuntsane was perfectly positioned to make light work of the set-piece.

Shots at goal were scarce at either end for the next 10 minutes, until a moment of brilliance from Radiopane who advanced into the box before feigning a shot, which created space for him to shoot at goal, making it 2-0.

Cwinyane got in on the act just before the half-hour mark, heading in from close range after the Swallows defence failed to clear their lines from a Pirates free-kick.

With daylight between the two teams on the scoreboard, the hosts sought to reduce their deficit and enjoyed more of the possession leading up to half-time, but without making the most of it.

It was Swallows who came out firing in the second half, asking serous questions of the Bucs defence, which held firm amid unrelenting attacks.

The next goal came against the run of play in the 64th minute, and it was finished off by Radiopane, who got on the end of an excellent ball from Lungile Makambi, heading past the keeper to complete his hat-trick.

Swallows pulled one back in the 70th minute when Thuntsane was wrong-footed by a deflection from one of his teammates inside the box.

Just six minutes later, Radiopane showed that he was not content with just three goals on the day, and went in search for his fourth, which he got when he received the ball just outside the box and ran around the defence before firing into the far corner to make it 5-1.

With the clock ticking down, the Bucs Reserves were happy to preserve their four-goal lead and held firm to grab an emphatic win against their Soweto rivals.