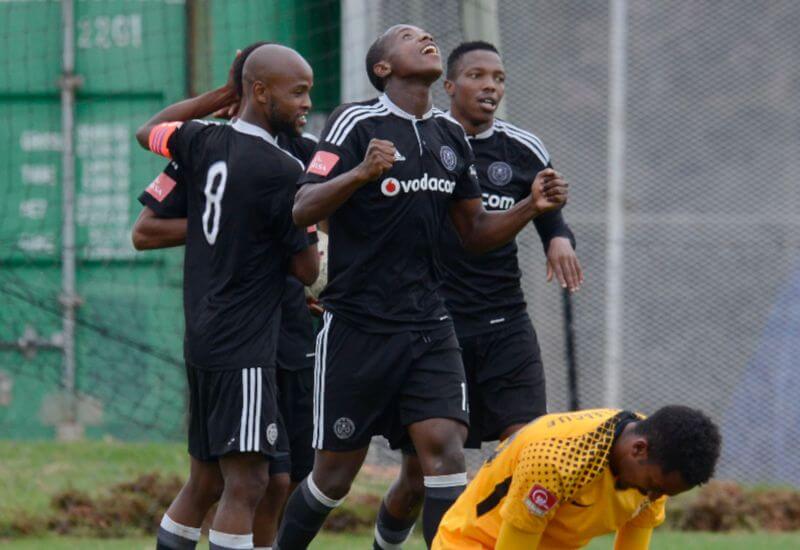 The Orlando Pirates reserves have made it back to the top of the SAB league table following their convincing 3-1 win over rivals and log leaders Kaizer Chiefs on Sunday afternoon.

Goals on the day were scored by Thabiso Monyane, Zakhele Lepasa and an own goal by a Chiefs defender.

Pirates, who came into this match trailing Amakhosi by two points, knew that nothing but a victory would be enough for the hosts.

However, it wouldn’t be easy as Chiefs had not lost a match in the league since their defeat to the Buccaneers in the corresponding fixture back in September 2017.

With the MultichoiceDiski Shield still two weeks away, Head Coach Philani Khubeka had the opportunity to select his strongest squad possible, featuring the likes of Saketso Moremi, Katleho Molaba and Grant Peters in the starting line-up.

The opening minutes of the encounter belonged to Chiefs. They bossed the midfield and had the home side on the back foot for most parts of the opening stanza however, the defensive duo of Reanetse Ramatlapeng and Fezile Gcaba were on hand to thwart any danger from the Naturena based side.

The home side began to gain more control as the game went on and it was no surprise when they took the lead in the 25th minute after Molaba was bought down in the box. Monyane stepped up and coolly converted from the spot.

Pirates were denied another goal scoring opportunity soon afterwards, when the referee awarded a Bucs freekick instead of playing advantage while Monyane was clear on goal.

The second controversial moment of the match came on the stroke of half time after Moremi was impeded in the box. The referee initially pointed to the spot but after consultation with his assistant he overturned his own decision and gave Pirates a free kick on the edge of the area.

The half time whistle came shortly afterwards with the Buccaneers holding on to a slender 1-0 lead.

The young Buccaneers threw everything in attack in search of the crucial second goal. It was through this continuous wave of pressure that Chiefs would buckle ten minutes into the half. The Chiefs defence failed to deal with a Thobela Sikhakhane corner kick - in an attempt to clear the ball out of danger a Chiefs player struck his own teammate and the ball deflected into the net.

It was 3-0 in the 65th minute courtesy of Lepasa, who turned his marker and struck his shot past the onrushing keeper. The red-hot striker netted his sixth goal in only three matches, to cap an incredible run in front of goal as the Bucs ascended to the SAB League summit.

Chiefs scored a consolation goal in the 87th minute after a rare lapse of concentration from the Bucs defence.