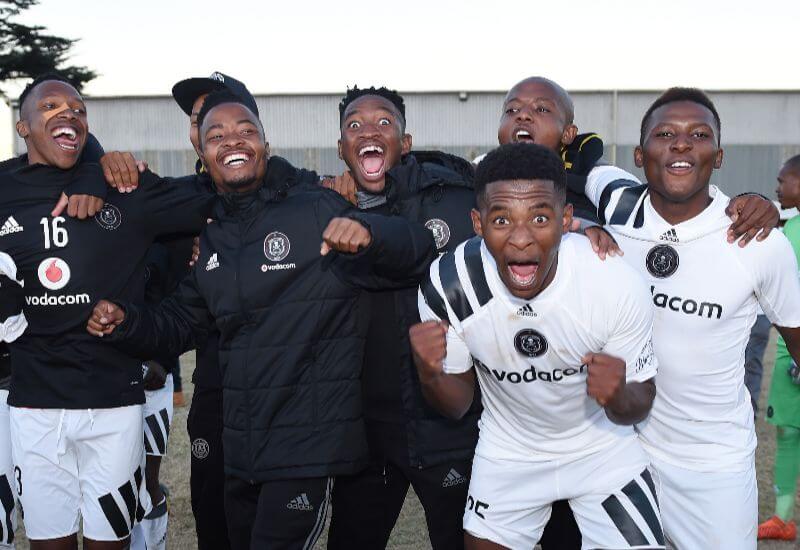 A great season in the Gauteng SAB League came to an even better climax at the WJ Clements Stadium in Reiger Park on Saturday, when Orlando Pirates secured promotion to the ABC Motsepe League in emphatic style.

Having dominated the SAB League from the start, the young Buccaneers clinched the title on the final day to secure qualification to the playoffs, where they were joined by four other regional SAB League winner, all vying for the two vacant ABC spots for the 2018/19 season.

With a positive opening round of fixtures where the Bucs secured the maximum six points from the their opening playoff weekend fixtures, the Reiger Park return would see the log leaders needing to build on that momentum to complete their promotion dream.

In the early morning fixture, ‘Ezimnyama nge Nkani’ were at their ruthless best, dispatching Sandton Super Stars with a resounding 5-0 win. Grant Peters was among the goals, hitting the back of the net, in between a double brace by the red-hot Zakhele Lepasa and Katlego ‘Kuruman’ Cwinyane.

The comfortable result meant that the Buccaneers secured automatic promotion, with their points meaning that regardless of the result in the final game, their fate would already have been sealed.

Philani Kubekha’s charges had not read the script however, as their next objective was now to complete the perfect mini-league tournament, ending unbeaten in four games.

NWU Vaal were next on the agenda, needing to beat the Buccaneers to secure their own promotion in what would be a dead-rubber game for the Soweto Giants. In what was a classic portrayal of the scholarly phrase “charity begins at home”, NWU were sent back to the classroom as the Buccaneers put on a measured display, albeit after going a goal down in the opening minutes.

Yanga Baliso, Bonga Maphumulo and Thabiso Monyane all found the back of the net, before the students pulled one back on the stroke of full time, under the setting Boksburg sun.

Four games, two weekends, fourteen goals and a perfect record: the Buccaneers danced their way to the ABC Motsepe League in emphatic style.