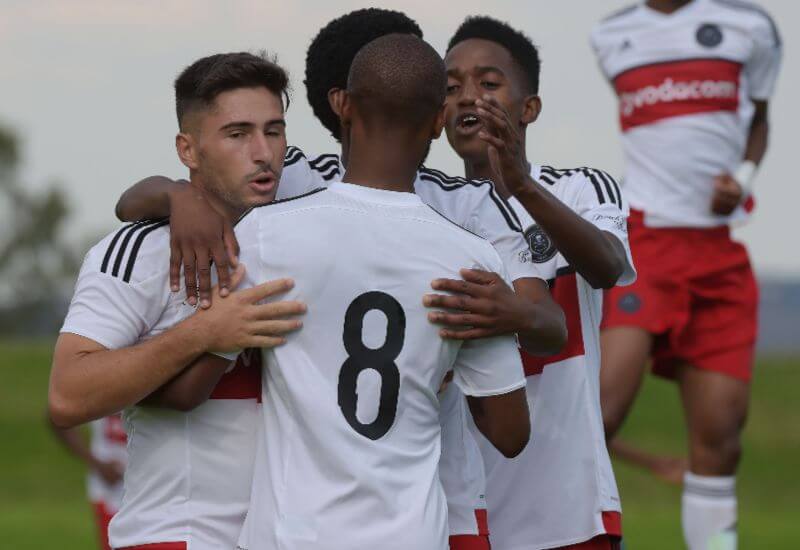 Orlando Pirates took an important step towards the SAB title, and automatic qualification to the playoffs after a narrow 2-1 win over Phalamorudu on Wednesday evening.

While the senior side entertained Bidvest Wits in the Absa Premiership, the young Bucs kept the tertiary onslaught alive as they secured three vital points on university grounds, this time at the University of Johannesburg Stadium.

A patient start from the log leaders saw Thabiso Monyane open the scoring in the 17th minute. The speedy attacker was well placed to profit from a cross from Grant Peters, before tapping in from close range.

It would take a moment of magic from Phila Mzila in the 31st minute to extend the lead, after Mzila took a measured and purposeful run towards goal, taking on three defenders before slotting home for Bucs’ second goal. Mzila was in inspired form, following his 2nd half hat-trick in the previous game, and he looked to continue where he left off.

Half time saw the Bucs comfortably into the change room with a 2-0 lead.

Philani Khubeka’s charges came into this game with a thin squad following injuries, and the coach wouldn’t have been too impressed when keeper Tsebo Tsotetsi went down injured. Without a substitute goalkeeper on the bench, it would have been left to marksman Zakhele Lepasa to don the gloes and see out the remaining 25 minutes of the crucial tie.

Tsotetsi recovered and resumed his role between the sticks and conceded in the 68th minute after failing to stop a well taken penalty.

The Buccaneers would see out the rest of the game and hold on for a valuable 2-1 win, with only one game to go. FC Meadowlands now stand between Oralndo Pirates and a maiden SAB League triumph on Freedom Day, Friday 27b April. The match will kickoff at 11H00 in Braamfisher.