SAB Playoffs start with a bang 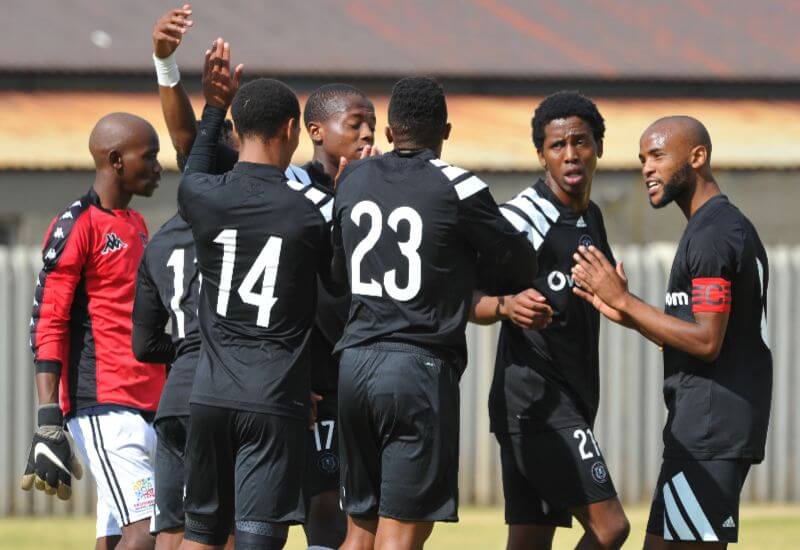 Winning the Gauteng SAB league was a thing of the past when the Orlando Pirates Reserves set foot at the WJ Clements Stadium in Reiger Park on Sunday morning. Facing a new challenge of a five team mini-league, the Bucs would need to be at their best as they prepared for two tough matches in one day as they chase the promotion dream.

The midday kickoff saw ‘Ezimnyama’ take on XI Experience from Ekurhuleni. The Bucs took the initiative early and in the 15th minute captain Malefole “Nchebe” Molaba controlled brilliantly on the chest to create a pocket of space to release Zakhele Lepasa on the edge of the box. The Bucs striker, hot off a trip to Brazil, did well to control under pressure before firing narrowly wide of target.

It wouldn’t be too long before the deadlock was broken, when two minutes later, Grant Peters slipped his man on the edge of the box, turned into danger and was brought down before he took his shot. The referee pointed to the spot, Peters picked himself up and fired home for the lead.

Lepasa would make it 2-0 just a minute later after the Bucs recovered the ball from the restart. Molaba was at his inspirational best, shifting wide to pick an inch-perfect pass for Peters on the edge of the area. The Bucs man mistimed his shot, which fell to the ever-alert Lepasa, who tucked home beyond the stricken goalkeeper.

Molaba was pulling the strings in the Bucs midfield, killing off any Ekurhuleni attack before sparking his side onto the front foot. The Soweto Giants were on song and kept wave after wave of attack on the XI Experience final third, the only way to stem the attacking tide being illegally. XI Experience would rue their transgression though, when Molaba would clip a freekick over the wall for ‘Shoes’ Ramatlapeng to smash into the roof of the net from inside the area for 3-0.

It would be 4-0 on the stroke of half time when Peters scored his brace after some good work by Thobela Sikhakhane down the left to beat his man and put in a telling cross, which Lepasa let run for Peters to tap home from close range.

The second half would start fairly slowly for the Bucs, who had all but secured the points. With another game in the afternoon, it was an exercise in game management, which the Buccaneers executed very well.

Things took a turn when Phila Mzila’s introduction sparked life into the Buccaneers machinery. The gangly number 6 played a lovely ball to split the defence and release Sikhakhane on a powerful run on goal. The keeper was left with no choice but to leave his line, for Sikhakhane to go around him and tap across to the unmarked Lepasa to make it 5-0 and complete his brace.

XI Experience would pull one back in the 64th minute after a mistake from Ndumisa “Zuluboy” Magwaza left Kopano Thuntsane exposed in the Bucs goal.

The Bucs would continue to slow the game down and the ref would blow time on a resounding 5-1 victory in their opening game.