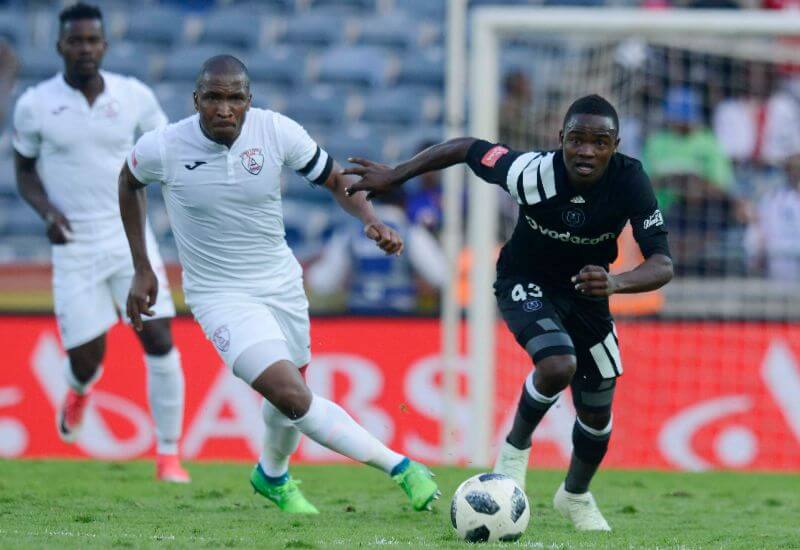 The end of the 2017/18 Absa Premiership season brought many positives with it for Orlando Pirates: a second place finish, automatic CAF Champions’ League qualification, a healing of souls – and equally as important – a new name in the starting line-up.

As the Buccaneers took on Free State Stars on Saturday afternoon at Orlando Stadium, the name of Siphumelele Mbulu would stand out as the stadium announcer made his way down the list, introducing the squad that would turn up for the last time in the PSL season.

Recently promoted from the youth academy, Mbulu was moved by the opportunity to make his bow in front of the home support, as he caught up with Orlandopiratesfc.com after his debut.

Did you know that you would start

“I had a feeling on Friday after training that something might happen because Coach Micho and Coach Benson called me, Xola Mlambo and Marshall Munetsi back, to talk to us about how we should play and cover each other. I also didn’t want to read too much into that situation because on any day we are called up as departments, so we know how to work with each other. Xola plays higher up than the two of us, so it made sense that as deeper players we would be called back to understand his movements and see how we can complement him.”

“When we left for camp, I knew then that I would be part of the squad so I called home to let them know what was happening. I told them that there was a strong chance that I could play since it was the last game, and that they should be on the lookout.”

“The game started on Friday night at camp. I had Happy Jele as my room-mate and he helped calm me down a lot. He was telling me stories of his debut, and how he was encouraged by the seniors around him. The one thing he kept repeating was that I should play my game and know that the players around me would support me.”

“On Saturday things became real when we had our team briefing before the game. We always discuss the plan one last time before we head out and they also call out the team that will start the game. Keeper, back four, Munetsi, Mlambo, Mbulu… goosebumps! It was difficult to concentrate on anything else after that because I was thinking about the game.”

“I was very nervous on our way to the game because everyone was talking about the match and what they needed to do. It was nice being with Xola because he kept encouraging me and also gave me advice about the possible opponents we will face on the day. After we had shaken hands with the opposition, we got into our huddle and Ntsikelelo Nyauza led the team in welcoming me one last time before we kicked off.”

About the game itself?

“I think I played too safe in the first half, I didn’t want to make any mistakes so I played within myself. I usually look for the ball and make tackles but it’s a much quicker game when you are playing in the seniors. Free State Stars are a tough team because they don’t give you space on the ball. As soon as you make a mistake they win the ball and suddenly break with three or four guys. I didn’t want to be the reason we conceded any goals so I think it took me out of the game. The second half was much better because I felt like I was in the game a bit more. The players also helped because they gave me touches in comfortable places and encouraged me to play positively. There was constant encouragement as the game wore on, and I felt more at ease.”

“This debut was special for me because it was in front of the home fans, they are very passionate and full of support. Any other fans would have stayed away from the team after last season but they showed their love in the best way possible by sticking with us through thick and thin. There was a huge expectation and the players knew what they needed to do in this season, and the technical team kept reminding us of our responsibility to the fans and that kept us motivated.”

“I feel very happy that in a small way, I have helped the team contribute to the objectives of healing the souls of the fans by getting to second place and qualifying for the CAF Champions’ League. We have so much to look forward to in the new season and hope that we can continue to make the supporters happy as we take on the new challenges that await us.”